The Stories of Breece D'J Pancake 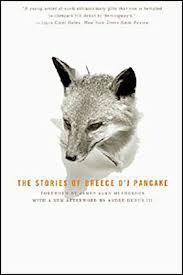 Breece D’J Pancake, The Stories of Breece D’J Pancake (1984, 2002, New York: Little Brown and Company), 186 pages (140 pages of stories plus forward and two “afterwards” by those who knew Pancake).
I  picked this collection of short stories several years ago after reading about the author in Gregg Bottom’s collection of short stories titled Sentimental, Heartbroken Rednecks.  The title of Bottom’s book is from a story he wrote about Pancake.  Consequently, I never got around to reading this book until last week.  It’s a delight, even though many of the stories are dark and foreboding (which is how I remember much of the 70s, the decade in which Pancake wrote!).   Pancake was a promising young writer who had attended Marshall University and the University of Virginia.  In 1979 at the age of 26, he committed suicide.  This book was published after this death, although a number of the stories were published in The Atlantic as well as some literary journals during his lifetime.

Shortly after finishing the last story of this book, I heard Everlast on Pandora Radio sing “What It’s Like” which appeared on the album, “Whitey Ford Sings the Blues.” I couldn’t help but think that Everlast had put Pancake’s words to music.  Everlast’s lyrics cause you to pause and have empathy for those who are struggling with life in the same way that Pancake’s stories elicit empathy.  The story that stands out the most is “A Room Forever.”  A second-hand on a tug boat has come into town on New Year’s Eve; he’s to ship out the next morning on the tug Delmar.   People are preparing to party, but you get the sense it’s all empty.  The story conveys a cold gray depressed city.   He can’t decide how to celebrate because he wants to be clear-headed when doing the dangerous work of walking out the barges in the cold and slippery conditions.  He ends up meeting a girl who offers herself to him.  She drinks heartily and he thinks to himself that she won’t be able to drink herself out of this.  He surmises that she’s new in the prostitution business, yet ends up sleeping with her even though he is hurting for what she’s becoming.  He offers her his room for the night, but after collecting her $20, she heads out into the cold.  He later runs into her in a bar and then afterwards finds her in an alley behind the bar, where she slit her wrist.  In the cold, the blood doesn’t flow fast and he calls for help, but quickly leaves before the cops arrive asking questions, heading down to river to see if his tug is ready.

Pancake created realistic characters that live in and around West Virginia.  These are guys who work on tug boats, dig coal, mechanics, and farmers.  They are proud, independent and know hard times.  They struggle with relationships, drink, hunt, fight and enjoy cockfighting.   Occasionally they have visions of life out of the hills, of Michigan, New York and out west, but mostly they are tied to the land they’ve grown up on even though in some cases the land is no longer theirs.  Although the stories can often be hard or sad, Pancake is able to capture details that pull you into the story and into caring for the characters involved.  It is sad that this is the only collection of stories from Pancake.  They should be cherished, savored and ponder.
Posted by sage at 11:44 AM