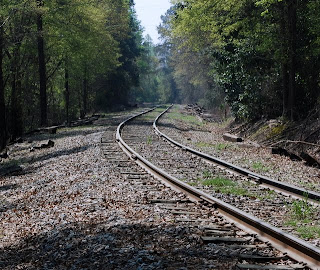 The photo to the left is of the Aberdeen, Carolina and Western Line. Unfortunately, I do not have a photo of the old Atlantic Coastline that I refer to in this post. The track mention was removed in the late 1970s.

"We’ve lost a good friend, Sage,” Terry said after we’d exchanged greetings. I’d forgotten my cousin knew Charlie. Charlie’s wife had inherited a track of land and my cousin had harvested longleaf pine straw off of it. Terry told me about the old homestead near Cowpen Landing on the Northeast Cape Fear. Although I’d heard about the place, I’d never been there. My cousin told me the old house had fallen in, but the chimney was still standing and Charlie had pointed out to him an indention in the brick where his mother-in-law would stop and sharpen the blade of her butcher knife, running the metal along the brick, before walking out to the smokehouse to cut a slap of meat off for a meal.

I came to know Charlie during my time at the bakery. I hired on the summer I was nineteen, between my freshman and sophomore years of college. Charlie would have been almost sixty then and had spent most of life working for the bakery. You could always count on Charlie to lighten things up with a good joke and you knew that any joke he told would be clean. Charlie worked hard, but could laugh harder.

One afternoon, there wasn’t much to do in the plant as we’d run out of flour and the railcar, which was scheduled to be delivered that morning, had been delayed. We sat out near the loading dock where we could look down the tracks. Charlie came by and told us about growing up next to the railroad tracks, out north of the Green Swamp, east of Wilmington.

His daddy had been a section foreman for the Atlantic Coastline, maintaining the rails and water tower along a section of the mainline between Delco and Bolton. It may not look like much to those who speed by these days on Highway 74-76, but it’s a magical place. He land is as flat as a pancake and grows some of the most interesting plants on earth including the Venus flytrap. In some areas, there’s sand upon which grows stately longleaf pines and huge live oaks. In other areas, its swamp and you have cypress trees growing up out of the water, their sparse limbs dangled in Spanish moss. This is black-water country, water darkened by the tannic acid produced by the cypress. Often, in the evenings, fog will develop over the waters, making it all the more mysterious.

Just down the tracks from where Charlie grew up was Maco Station. There, just a couple years after the Civil War, at a time the line was known as the Wilmington and Manchester Railroad, a brakeman named Joe Baldwin was riding in a caboose. His car became decoupled from the rest of the train and started to slow down. When Joe realized what was happening, he grabbed a lantern and ran out on the back deck of the car, swinging his lantern back and forth, a universal sign on the railroad for trains to stop. He knew there was another train following them and he hoped to signal the engineer in time. But in the foggy swampland, the engineer didn’t see the signal until it was too late and the engine collided into Joe’s car, destroying it. Joe was killed, his head severed from his body. As they cleaned up from the accident, they never found his head and Joe’s body was buried without it. Most just assumed the head had rolled down the embankment and into the black waters.

Shortly after Joe’s death, people started reporting a strange light in the swamps near the Maco sidings. Some suggested it was Joe’s lantern swinging along the tracks, moving through the swamps and a legend developed that Old Joe was still looking for his head. Charlie had seen the light, but he didn’t believe it to be Joe’s lantern. If I remember correctly, he brought into one popular theory that the lights were caused by swamp gas.

Living by the railroad tracks, hearing that lonesome cry from the engine pierce through the night as freight rolled toward the port in Wilmington must have been sealed in Charlie’s memory. But that lonesome wail can also bring sadness, as Charlie shared with us.

A year into the Great Depression, when Charlie was still just a boy, finishing up grade school in Acme, the lonesome wail wasn’t being heard as much. There was so little freight moving then that the railroad laid-off every other section foreman. Charlie’s dad lost his job. The next day, Charlie went with his dad into Wilmington to look for work. But there were none to be found. Coming back home, late in the day, discouraged, they noticed smoke over the distant pines. As they got closer, they realized their house was totally engulfed in flames. The family lost it all. Charlie’s life was forever changed. He went to live with family in Wilmington, where he worked hard and earned little until the war came and he joined the Navy.

You’d think that after such hardships, Charlie would have been bitter, but there wasn’t a bitter bone in his body. Charlie was one of the most joyous and positive individuals I’ve known. He seldom complained. Even when he had good reason to complain, he’d just shuck it off. He always gave people the benefit of the doubt. He was a good man. Thinking about him, I’m left to wonder why it is that some people can endure tragedy after tragedy and still be joyful about life and positive about the future. In Charlie’s case, I’m sure it had to do with his faith. He knew he was loved by God and he found joy in creation, in life, in laughter and in good friends.

My cousin met Charlie long after I had left the bakery. “Charlie thought a lot of you,” Terry said, “he was always asking about you.” “Well, I’ve been thinking a lot about Charlie lately, too.” He died this year, two weeks before Easter, at the age 91. Hearing of his death, it seemed as if a part of my past had died along with him. Charlie was the one person from my time at the bakery that I would occasionally see. After he retired, Charlie found a home in the church I grew in and whenever I visited my parents on a Sunday, Charlie and I would get together during the coffee hour after worship and talk about old times. I’m going to miss him.