I often check out the The Ultralighter's blog and he's turned me on to some other interesting blogs by people who try to really travel light. There seems to be a contest going as to who can make the lightest backpacking stove. Two blogs in particular had an interesting post on stove making. Dressed in Dirt combined making stoves and ice cream floats. Her technique was even refined more by Mungo (I wish I had followed his directions on how to make a cleaner cut of a pop can). Anyway, last weekend I decided to see if this all worked and built a 20 cent backpacking stove that burned alcohol. I say it's a 20 cent stove because here in Michigan, we have a 10 cent deposit on pop cans. My goal was to build the stoves using only a Swiss army knife--thinking that the ability to make such a stove might be a good thing since airline security makes it harder these days to bring smutty backpacking stoves through security. Here's my effort. 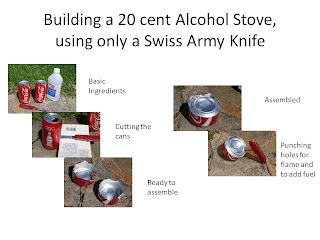 Next, I decided to test my stove using both denatured alcohol (which you can find in the paint section of any hardware store) and regular rubbing alcohol (which is only 70% pure, so doesn't put out as much heat). The alcohol gets poured into the middle of the top (larger holes, the flames come out the side holes). I put a pot of similar size with 24 ounces of water in each. The rubbing alcohol stove had a harder time staying lighted, so I ended up lifting the pot up over the stove with a few rocks I garnered from the flower bed... 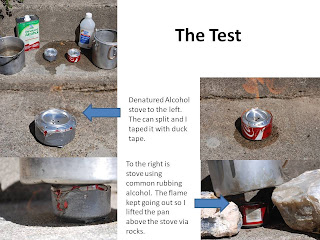 Notice, the denatured alcohol stove also had a little duct tape applied as the can split (which I noticed when I poured in the alcohol. The water in the denatured alcohol stove, by the time I had burned up all the alcohol, was beginning to have bubbles rise to the top, but it wasn't a full boil (but hot enough for coffee or tea). The other stove had water about that was warm enough to wash one's face in. 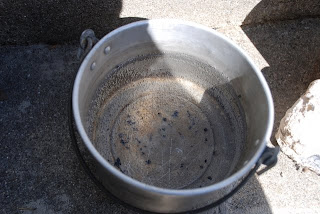 I now feel I can make such a stove from easily obtained products, but when possible I think I'll stick to my MSR multi-fuel stove. This is the second of these I had (the first was the original and sounded like a jet taking off and still works, 20 some years later. This whisper-lite is really nice, as it is quiet and doesn't use as much fuel.) I would recommend paying the extra ten bucks for the multi-fuel variety as it allows you to buy fuel from a gas station and not having to pay the expensive (and deal with having the extra fuel you don't need) Coleman fuel. 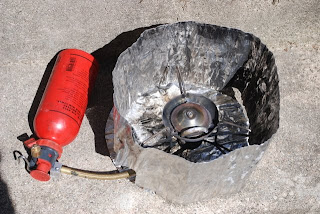 Now an ethical dilema: If they extend the Appalachian Trail another 300+ miles, to Flagg Mountain Alabama, should I hike the extension? Check out this article.
For those interested in the Appalachian Trail, there is now an online profile of trail elevations--when I was hiking the trail, I referred to these as "misery maps."
I was going to go canoeing today, but there is a huge band of thunderstorms heading our way. Time to dope the dog.
PS: Here is another variation of a home made alcohol stove that seems to be a design that may work better than the above (but it requires a few more tools than I normally have in a backpack).
Posted by sage at 8:28 AM