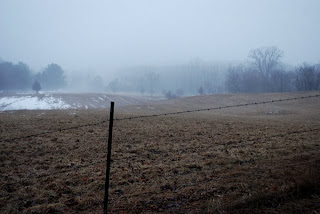 The day started out foggy. It was kind of eerie last night, you could see the fog rise from the places were there was still snow on the ground. It was heavy enough this morning that the schools were on a two hour delay. As I was heading to school first thing this morning, the delay gave me time to do other stuff… 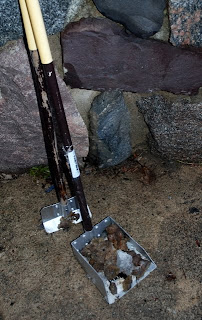 -
Spring is on its way. There are daffodils sprouting up around the house and should be blooming soon. As the snow retreats, I have one of my least favorite tasks--poop patrol. This morning, while waiting, I noticed the brown piles across the backyard. I was hoping it was where the snow plow guy missed the driveway or where moles had dug up the yard, but I wasn’t that lucky. I got busy with the scooper and a pocket filled with plastic grocery bags. There was a lot of poop to scoop, a good three months or so worth of it. By the time I was done, I had filled four grocery bags which I placed into a large garbage bag and will send out in the trash on Monday. 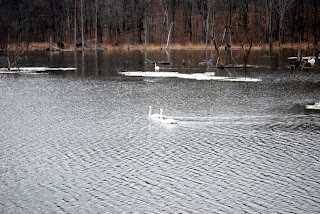 I made sure that I washed my hands before taking my daughter to school. March is reading month and someone thought it would be good to have guest readers in the school and that I’d be a good one, so this morning I headed to an elementary school and read stories to a bunch of second graders. It felt good to read Thomas the Tank Engine stories again, along with other favorites from my daughter’s earlier years. In the afternoon, I took a walk along the old railroad grade that runs beside the river. The ice was mostly melted in the backwaters behind one of the dams and the open water drew in several dozen swans. Out in the river, away from the swans, two sets of Canadian Geese were having a hooking contest. I wonder if those birds ever get strep throat?
Posted by sage at 8:47 PM