This, that and the other

I had great hopes to do a lot of writing this week. After all, my schedule wasn’t overbook and I had some extra time, but for some reason, my muse just didn’t show up. I should have know by now that I never really feel like writing unless life is chaotic and hectic and deadlines are staring me in the face… So, what did I do this week? I watched portions of the Olympics, trying to catch as much skiing as possible. I started out the Olympics being furious with the announcers who embedded a commercial for some new Dreamworks movie into their script. I wanted to scream, instead I struggled to find the mute button on the remote. Other than that, I have enjoyed the Olympics and the USA is really racking up the metals. 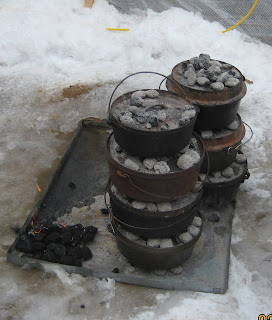 As some of you know, I’m involved with a fairly major construction project that go off slow and way too much work has had to be done in the winter. The good news is that we’re far enough north that we’re getting the benefit of global warming… We’ve had a mild winter and a lot of work has happened so on Tuesday, a couple of guys joined me and we prepared a Dutch Oven lunch of baked chicken, potatoes and cobbler for 44 construction workers. We had enough food, but there were no left-overs! It was a lot of fun and hopefully they know that we appreciate them working through the winter. 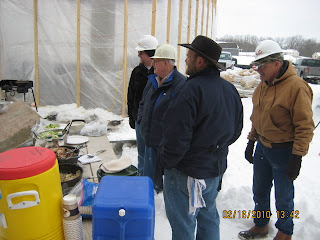 The cooking crew... Don't tell Osha that I wasn't wearing a hard hat. 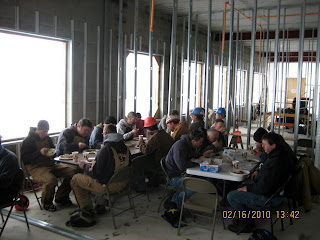 Eating in the partly constructed building... 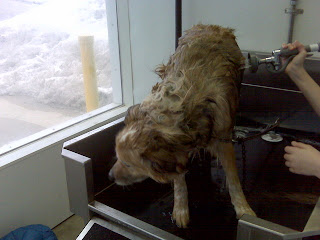 Another thing on my to-do list was to give the dog a bath.. There is a new doggie bath at the car wash and I decided to try it out instead of messing up a bathroom. It worked well, but next time, I’ll just mess up a bathroom because I can clean it for what it cost. Trisket wasn’t particularly happy as you can see from this photo taken on my blackberry. Or maybe it’s because the camera flashed and the dog doesn’t like that. The good news is that the dog doesn’t smell like one anymore… The have a number of shampoo settings for dogs, including a skunk-scent remover. I’ll have to remember that in case my dog ever decides to get personal and up-close to nature. But if he does, he's riding in the back of the truck, not up front.

Other than that, I hit the gym four days this week. I skipped Friday because I was a chaperon for the Middle School ski club in the evening. Even though the hills here aren’t as large as Vancouver, I can assure you they were just as icy. A night of skiing on icy runs does give a little burn to the thighs. I was hoping to do some more cross-country skiing, but the warmer temperatures have, once again, ruined the base we had. We’re suppose to get more snow this week.

Hopefully tomorrow, I’ll finish my next segment in my Appalachian Trail hike, where I hike over Mt. Washington and the Presidentials in New Hampshire. I also have some more stories to write about the desert southwest… Maybe this week, but that’s what I said last week.

What are you doing this weekend?
Posted by sage at 7:50 PM