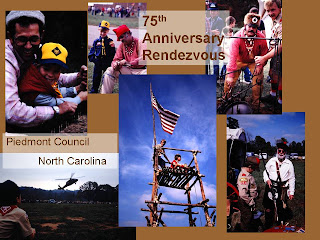 Today is the 100th Anniversary of the Boy Scouts of America. Scouting in America began on February 8, 1910. That makes me feel old as twenty-five years ago, I was the staff person in charge of a large council “Rendezvous.” It was my last year of working for the Boy Scouts and part of the horrible Fall of 1986, where I found myself with scouting functions every weekend and just about every night, Monday through Thursday, from the day after Labor Day to the week before Thanksgiving. That January, I made the decision to go back to school and left the following September for Pittsburgh, but that’s another story. 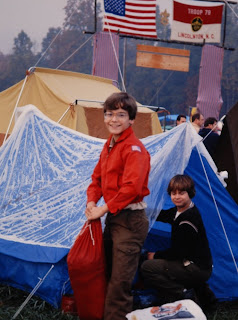 The Piedmont Council Rendezvous was held at the Catawba County fairgrounds. I don’t remember the exact numbers, but there were thousands of Boy Scouts camping and probably an equal number of Cub Scouts who came in for the Saturday activities, as well as untold numbers of parents, former scouts, politicians and other interested folks. The weekend went off without a hitch. The weather started off a little wet, but it cleared up and by Saturday afternoon was gorgeous. There were all kind of mountain men and other folks doing demonstrations. That evening, we had a show that included live music, a speech by Miss North Carolina (who charmed us offstage) and James Broyhill, (our local congressman who’d just been appointed to the US Senate where as a Republican, he’d battle it out with Jessie Helms which assured his defeat in the upcoming elections, but that’s another story). The night was capped off by a firework display put on by Zambelli Fireworks. 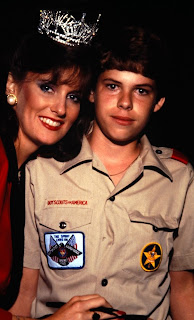 Everyone did their jobs well and I found myself mostly walking around taking photos and talking to folks. On Saturday morning, I went up in a plane owned by a local scout leader and photographed the event from the air. On Sunday afternoon, after everything was cleaned up and I was home, I’m sure I took a nap.

After the event, I created a slide show of the festivities. The photos you see are copies of slides. 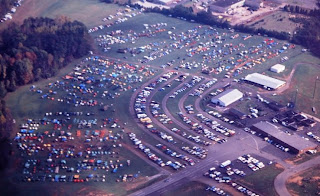