Getting Stoned with Savages (A Book Review) 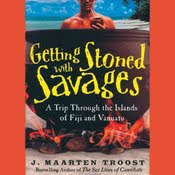 I'm slacking. I haven't done a Travel Tip Thursday in a couple of weeks. Here's the next to best thing, traveling to the South Pacific via a book...

J. Marten Troost, Getting Stoned with Savages: A Trip through the Islands of Fiji and Vanuatu (7 hours, 30 minutes)
-
This was the first book I’ve read by Troost, but I’m sure it won’t be my last. However, I didn’t actually read it; I listened to the unabridged audio version, twice! Everyone at the gym thinks I’m crazy as I’d break out laughing while working up a sweat on the elliptical machines or while laid out on the bench with weights overhead. The later is not exactly a smart thing to do, but this is a funny book. Having read some reviews of this book, I found many readers saying it’s not as funny as Sex Lives of Cannibals. If that’s the case, Troost’s first book must be really funny.
-
Troost starts out his story in , wearing suits and working at the World Bank. As his bank account soars into the “4 digits,“ he begins to long to be back in the South Pacific, where he’d recently spent two years, tagging along behind a girlfriend who had a real job. Troost went there to be a writer, earning $350 during his two years. As one friend questions him, just how did someone who’d earned $350 in two years come to a position of influence at the World Bank, advising entire countries about their finances? In the end, it didn’t work out. Troost is ready to go back to the and the World Bank is happy to assist. His former girlfriend, now his wife, has a position with NGO. The plan is for them to move to , but political unrest lands them in , a volcanic chain of islands where he finds plenty to get himself into trouble while writing his first book (The Sex Live Cannibals). is a chain of islands with a half-dozen active volcanoes, earth so unstable that one has to be use to silverware dancing across the table, and a shared history of cannibalism and French and English colonialization.
-
Packing for the South Pacific, according to Troost, is more a process of subtraction. Out go the suits and ties and long pants and socks. All that‘s left are a few pair of ratty shorts and colorful shirts, sandals and flip-flops. Once on the island, Troost and his wife set out to see the island and end up getting the car of a co-worker stuck. Troost spends his time on the islands exploring and experiencing life. They climb an active volcano, he sets out to meet someone who has “eaten the man” (the last known case of cannibalism occurred on the islands in 1969), experiences the ravages of a cyclone, and explore the corruption of the government. But mostly, Troost discovers his love of Kava, a narcotic drink. He’d had Kava before, in the South Pacific, but unbeknownst to him the Kava in is much more potent and when he drinks two “shells” of them, he finds himself out of commission for a few days.
-
After a couple of years on , Troost and his wife decide to have a child. As medical care on is limited, and is now politically more stable, they decide to move. Furthermore, as Troost muses, being born in will give his son the opportunity to snowplow down the slopes in a future Winter Olympics, as the only member of ’s ski team. Troost goes ahead of his wife, to find a place to live and finds himself being harassed by transvestites’ prostitutes. He muses that the capital of , built by the British as their outpost in South Pacific, is the only place in the region to have mostly cloudily skies, a feat only the British could achieve. There, they lose their backyard to a landslide and watch rugby and have a baby boy. Troost explores the difference between the native Fijians (who are laid back) and the gung-ho Indians who were brought to the island as coolies by the British and who run much of the businesses on the island. The book ends after the birth of a son and with Troost becoming more responsible.
-
Although the book is humorous, Troost helps his readers learn about the island’s history, culture and politics. Yet, the book is mostly funny and I recommend it for its laughs.
Posted by sage at 6:55 PM