The Future of Management (A Book Review) 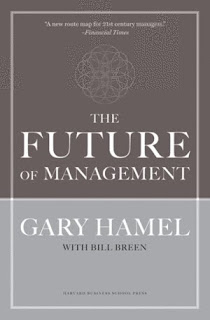 It's Friday night and I'm writing a review of a business book and watching the Wizard of Oz...
Dorothy asks the scarecrow: "How can you talk if you don't have a brain?"
Scarecrow: "Some people without brains do a lot of talking."

Our current management practices grew out of the rapid industrialization of the late 19th and early 20th century. In their time, they were very efficient at dividing up labor and responsibilities and creating hierarchies along with rules and regulations. These practices have raised productivity and increased our standard of living. Unfortunately, as the pace of change accelerated over the past few decades, those organizations holding tight to past practices have found themselves left behind. In The Future of Management, Gary Hamel calls for new management innovations to meet the new challenges of the business world where old corporate oligopolies now finding themselves competing with fast start-up companies; a world where the internet and the digitalization of media have shifted power from the producer to the consumer and threatened intellectual property rights; and a world where decrease costs for communication and the increase globalization now means every industry is faced with ultra-low priced competition. In this new landscape, those who hold on to the past will fail. Yet, change is hard because we have so much invested in the former ways of doing things. Change requires organizations to alter their corporate DNA.

In the past, no one expected managers to be innovators. Their task was to take ideas from other people and figure out a way to make a profit. (35) In the new organization Hamel foresees, the work of innovation will be everyone’s job and one of the task of those in management will be to create a company where everyone gives their best. We need to tap into the brain power of all members of an organization. One of the problems facing all companies and organizations is that only 14% of the employees (in a worldwide study) were seen as highly engaged in their work. With the changes we’re experiencing in the world today, passion, creativity and initiative are far more important than intellect, diligence and obedience. An organization with too much hierarchy and too little freedom will have a hard time navigating the continual changes that are now required. Organizations need to learn how they can broaden employee freedom without sacrificing focus, discipline and order, how they can enhance the community to bind people together (as opposed to the bureaucracy binds people together), and how to instill in everyone a sense of mission that calls them to do the extraordinary.

Hamel provides three case studies of companies who’s management practices are innovative. Whole Food Markets is a supermarket that takes on the challenge of reversing the industrialization of the world’s food supply and to give people better things to eat. The second group is a private company, W. L. Gore, started by a former Dupont Engineer, that attempts to do away with the traditional hierarchy of corporations and that encourages all employees to work on new ideas. The third organization is Google, who has a 70-20-10 rule. Seventy percent of one’s work time is on core business, twenty percent on new products that can extend the core and ten percent devoted to fringe ideas. Working at Google is often described as feeling like graduate school. All these companies strive to get the most of their employees by allowing them all freedom to be innovators. Unlike traditional companies that has a special department to develop new ideas, one that’s often kept at a distance from the rest of the organization, these companies see involve everyone in developing new ideas and products.

Of course, making such a change is not easy (Hamel describes it as escaping the shackles). Hamel uses life, markets, democracy, faith and cities as metaphors in describing how to generate new ideas. Hamel identifies six challenges to existing organizations: