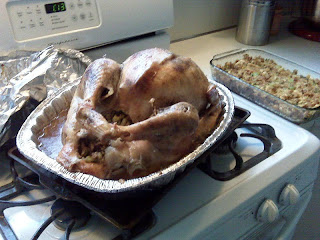 Sorry about the photo quality. Instead of digging out my regular camera, I used my Blackberry and there is quite a difference in the quality of photography between the two.

I woke up this morning to find the first snow of the season. It ain’t much and it ain’t even that cold, the thermometer hovering just around freezing, but it sure is nice to see the naked tree limbs, bare of any leaves, frosted in white. The dog seemed to love it too. When I took him out, he didn’t want to come back in so I put him on his dog run. Instead of Black Friday, I’ll celebrate White Friday. I’m saying away from the stores today, but will go out this afternoon and cut down a Christmas tree. It’s that time of the year and I have a party coming up, so things need to be decorated. Every year I tell my daughter we’ll put up the tree on Christmas Eve, but I’m only pulling her chain.

Yesterday was fun. Earlier in the week, I’d gotten a freshly killed 22 pound turkey from a local farm that raises birds without drugs or chemicals and does their own slaughtering. Tom was waiting in the refrigerator when I got up at 5:45 AM. I cleaned him, stuffed and prepared him and slid him into the oven and was back to bed for a “nap” by 6:15. That was thanks to the preparations I’d done the day before.

I’d made the sausage and cornbread dressing on Wednesday night, so it was all ready to go. In addition to the sausage that’s made by a local butcher, my stuffing consisted of cornbread and hushpuppies left over from last Friday night’s feed, a few pieces of crumbled toast, chopped onions, peppers and celery along with some seasonings. I rubbed the turkey with oil olive and peppered it well (in a non-Cheney fashion), put it in a large foil pan. As the pan was flimsy, I placed it on a heavy flat pan. Next I loosely filled the cavities with stuffing and put about ½ inch of water in the pan. I then created a foil tent over the bird, that I sealed up well and slipped the bird into the oven at 325 degrees. After seven hours, the bird internal temperature was at 180 degrees and it was done. I took the foil off and drained some of the juice to add to the stuffing that was in a baking dish, then cooked the bird another twenty minutes or so to brown it. I also took a cup or so of the juices from the pan and mixed in the stuffing I had in the pan and cooked it for 45 minutes. After taking the bird out of the oven, I dug out the stuffing from the bird and used it to mix with that which I’d cooked in the pan.

I wrapped the bird back up in foil and walked him over next door, where a group was gathering for the meal. It was all good: sweet potatoes, mashed potatoes and gravy, rolls, cranberries, corn and the onion rings on top of the green bean mess (I don’t eat green beans). There was cake and pie for dessert and bottles of wine to moisten our lips. The turkey was very juicy and the stuffing was to die for. For the rest of the day and on into the evening, I was more stuffed than Tom had been in the oven! I hope you all had a wonderful Thanksgiving Day. I need to get some slides copied and I’ll be ready to post my next section of my hike along the Appalachian Trail--.