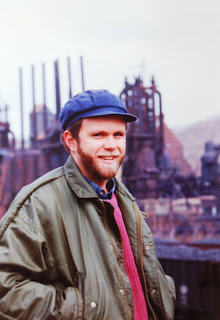 I've often written about trains and even wrote a piece about my return home on this trip. This was my first long distance train experience and also my only experience in a train wreck. Even though it would have driven many people nuts, I enjoyed spending the down time reading and making new friends. This trip was in December 1986. I mentioned the Homestead Steel Mills in the piece. The picture is of me in 1989, standing in front of the mill which, at the time, was slowly being scrapped.