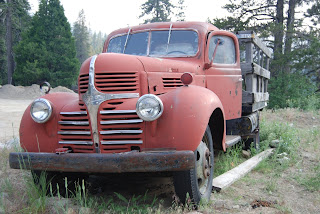 I photographed the truck at Strawberry, along US 50, between Placerville and Tahoe.

I left the wedding party in San Jose mid-afternoon on Saturday and headed north on 680. As much as I love this part of California, driving here always reminds me why I have never attempted to live here except for a few semesters as a student. So far, I had been spoiled on this trip, having only driven my rental car from the airport to the hotel. I was staying near a light rail station, so I took the train into the Convention Center for my meetings. Not driving was a pleasure. My rental car remained parked for four days—with the parking lights on. I’m not sure how I did that, I don’t even remember turning them on, but then with my truck the lights come on automatically, so I’ve gotten out of the habit of checking them. I knew something was up as soon as I hit the clicker and the door didn’t open. At first, I wondered if I had the wrong car (there were many silver cars in the lot). I had to use the key to open the door. When I turned the ignition, nothing happened but a faint “click.” Thank God for AAA and that I still had plenty of time before the wedding. In no time they had a guy there providing me with a jump and I was on my way… After the wedding, I replaced my suit with shorts, flip flops and a Hawaiian shirt and took off, knowing that I didn’t have to dress up anymore or have anything on my calendar till late Tuesday, when I’d catch a redeye back east.

Now back to my Saturday drive. With gas at 4.75 in the Bay Area, I figured I’d better enjoy the ride. I was surprised to see so many cars on the road. At least my compact rental gets twice the gas mileage as my truck! I take 680 North, across the high bridge over the Sacramento River, then pick up I-80 and headed east. At Sacramento, I take US 50, one of my favorite highways, although US 50 in California isn’t nearly as lonely as it is in Nevada. Having stuffed myself at the reception, and feeling the call to the mountains, I forget about dinner and push on passed Folsom, then Placerville, and up the South Fork of the American River till I get to Strawberry. I thought about grabbing a bite to eat, but since I'm officially on vacation, I decide that dinner will be two scoops of mint chocolate ice cream. This I savor as I walk around the grounds of this historic stage coach tavern, under the tall Ponderosa Pines, listening to the sounds of the headwaters of the American River. As I walk, I think about David Henry Palmer.

The Reverend David Henry Palmer died in 1910. Even though my grandparents were not yet born then, I feel I know him as well as I know a brother. I’ve read stacks of his letters, transcribed several diaries and published an article on him in a historical journal. On July 13, 1863, ten days after the Battle of Gettysburg and during the infamous New York Draft Riots, Palmer and Jennie, his wife of only a few weeks, left New York. They sailed on the Steamer “Northern Lights,” bound for Panama. There, they crossed the isthmus on rail, then took the steamer “Golden Age” to San Francisco, arriving in early August. During this time, Palmer wrote little in his diary, noting mainly that they were both sick. The couple spent a week in San Francisco and Oakland, with Palmer preaching in several churches as the two of them regained their strength for the next leg of the journey. On August 19, Palmer and his wife took an overnight riverboat to Sacramento, arriving at 6 the next morning. That morning, August 20th, they boarded a train for the run to Folsom, where they switched to a stagecoach. That evening, they dined in Placerville, at the foothills of the mountain. Then they took off for Nevada, on a stage that frequently had to change horses as it climbed up into the mountains on rocky and windy roads. Writing to his parent's, Palmer described his experience this way:
-

As the road became more difficult and dangerous, the speed of the coach seemed to increase also. Soon we found ourselves circling around lofty hills and deep valleys. Many miles of travel were but few of progress. The grade was nowhere very steep, but at times we could look from the windows on one side up hundreds and even thousands of feet to the summit above us, and from the other side as many feet below us upon the rocks at the bottom of the ravines. On this narrow crooked road, with no protection at the edge, with six galloping horses before the coach, which was rocking and jolting about, I felt none or little sense [of] danger, but was most deeply interested in the strange, grand, and awful scenery through which we were passing.

-
Later that night they stopped at Strawberry, where the coach changed horses before heading in the dark over Johnson Pass. In the early morning hours, they would skirt the south shore of Lake Tahoe and Jennie would later write home describing the moon as it shined over the lake. Although traveling by night meant that they would not be able to see much, it allowed the stage to make better time as the grades were filled during daylight with teamsters hauling freight over for the mines. Palmer’s stage continued on, leaving Tahoe and descending the steep Kingsbury Grade to Genoa, where the line turned north toward Carson City. They arrived on the morning on August 21 and checked in at the St. Charles Hotel, which Palmer wrote home describing as the dirtiest hotel he’d seen. After cleaning up from their journey, they had lunch with James Nye, the Governor of the Nevada Territory. Palmer didn’t have much of an opportunity to rest, for his arrival allowed the pastor of the Carson City Presbyterian Church to take a break. During his first two days filling in at that church, he officiated at three funerals which he described to his parents in this fashion: "The first an awful drunkard, the second one of the greatest gamblers and the profanest man in the territory, and the third was murdered."

My drive over the Sierras only takes only a couple of hours and that includes stops and the traffic around Tahoe. Instead of Kingsbury Grade, I come down over Spooner Summit and into Carson City. The sun has already dropped behind the mountains by the time I arrive in the valley, although it’ll be light for a good hour or more. I park the car and walk a bit in town, shocked by all the growth around the state’s capital. The St. Charles is still open, obviously having survived Palmer’s complains. The air is dry and a strong wind rustles the leaves in the old Cottonwoods around the capitol. It all feels so comfortable. “I love the wind. I love this land. I was once happy here,” I think to myself. I get back in the car and head toward the Comstock. I’m excited; I’ll be in Virginia City before nightfall.
-
Sage's note: The route from Placerville to the Carson Valley was made popular through a tale by Horace Greeley. He travelled the route in Hank Monk's stage in 1859. Mark Twain also writes about this in Roughing It.
Posted by sage at 1:23 PM