The Virginia & Truckee (and a 3WW)

It’s been a while since I’ve done a Three Word Wednesday. The words this week just seem to fit a post I’ve been trying to get around writing and encouraged me to get busy. Last month, while in Nevada, I took a large number of photos of the old Virginia and Truckee Railroad. This week’s 3 WW words are “history, narrow and spent.” The first is a card I created, the second shot (click on each photo to enlarge). 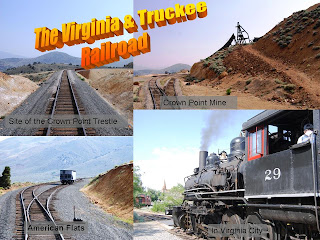 The history of the Virginia and Truckee Railroad is colorful. Built in the late 1860s to haul supplies from the Carson Valley into Virginia City, it was known as the crookest railroads in the world, with the line having the equivalent of seventeen 360 degree turns in the 21 miles of track between Virginia City and Carson City. Prior to the coming of the railroad, all supplies into Virginia City had to be hauled in by horses, mules, oxen and even camels. Transportation cost made commodities expensive and the roadways were crowded and dusty, or muddy, depending on the weather. In the era when it was customary to use narrow gauge lines for railroads in the mountains (the smaller gauge allowed for tighter turns), the owners of the V&T decided to spend the extra money to have a standard gauge line. Overnight the line became a success, hauling supplies in the town and ore out to the mills along the Carson River. In the early 1870s, a line was extended from Carson City to Reno, which was then just a town on the Truckee River and a stop along the newly laid transcontinental railroad. This was a prosperous time on the Comstock and businessmen were able to board a plush sleeper in Virginia, early in the evening, and wake up the next morning in San Francisco. Although the V&T continued to operate between Reno and Minden till the 1950s, service to Comstock ended in the 1930s. By then, the rich ore bodies of the Comstock were spent. The tracks were removed for scrap. 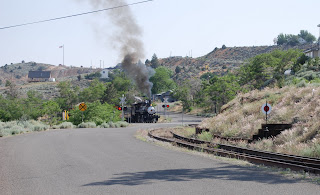 In the 1970s, the V&T was resurrected. An old steam engine was purchased and iron tracks were laid from Virginia City to the edge of Gold Hill. One of the things I loved about summer on the Comstock, when I lived there, was hearing the steam whistle and seeing smoke as the train chugged back into town with cars filled with tourist. In later years when I visited, I was excited to see that the tracks cross the highway in Gold Hill and stop by the station there. 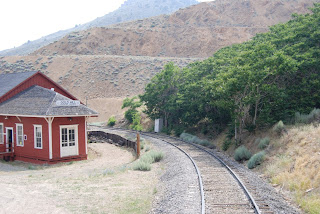 When I came into town last month, I was depressed to learn the steam engine had been out of commission for five years. During this time, an old diesel electric switcher was used to pull the passenger cars. It just wasn’t the same. But, on a happy note, I was told they’d laid tracks all the way down into American Flats and if I took the last train of the day, they’d run to the end of the iron. I hopped abroad. The train kept going south of Gold Hill, across what use to be the Crown Point trestle (which was made into a solid bed by using 1000s of truckloads of mining tailings), and on to the north edge of American Flats. It was exciting to know that after Gold Hill, I was riding on a rail bed that hadn’t been used in nearly 70 years. The community hopes to have the train running all the way to the edge of Carson City in two years. Then, people will be able to park their cars in the valley and once again take the crookest railroad as it winds its way up the mountains to Virginia City. After a day in the city, they can take the train back to their cars in the evening. Now, my story isn’t quite over… While riding the train on Sunday afternoon, one of the employees told me that the next day, if all went well, they’d bring back the old steam engine for a trial run. They were hoping to have the engine going in time for the July 4th weekend. I got to be there to watch the train make its run. Listening to her chug back into town was a real treat! I hope you enjoyed the photos... 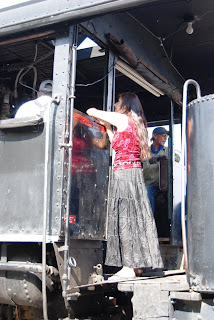 I've always wanted to be an engineer!
Posted by sage at 7:29 PM