Lost in the Wild: A "Non-fiction Challenge Book Review" 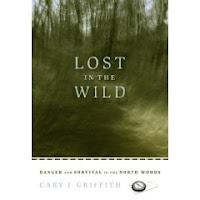 This is the first book I plan to read and review this summer for the Non-fiction Five Challenge. Click here for more about my summer plans (including my reading plans). 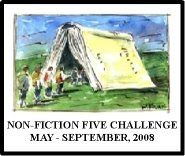 In August, I’m going with five other guys on a seven day canoe/fishing trip in the Quetico, a wild area of Western Ontario, just north of the Boundary Waters in Minnesota. As we discussed this trip, I’d lobbied for another location, in northern Ontario, quipping that the Quetico isn’t that remote. A few days later, one of the guys gave me this book. Of course, remoteness is a matter of degree and the Boundary Waters and the Quento are vast wilderness areas. It’s hard to traverse this country without a canoe and it’s a place where the mastery of outdoor skills and the ability to read maps are essential. Yet, even with such skills, there will always be dangers as Griffith demonstrates as he tells of two skilled outdoorsmen who were lost in this region.

Jason Rasmussen was a medical student. With some time off, he planned a backpacking trip on the Pow Wow Trail in the Boundary Waters. It was late October 2001. He was well supplied, but got confused as the area he was hiking in wasn’t well marked and there were many blow-downs and old trails left over from the logging days. He made a wrong turn and spent his first night camping off the main trail. Thinking he was somewhere he wasn’t, he continued on the wrong path the next day. He also took out his map and, putting it inside his jacket, where it fell out. On his third day, without a good map, he took some snacks and went out scouting, trying to find his way back to the main trail with plans to head immediately to the trailhead. This time, he lost his way and the weather changed, the rain turning to snow. Unable to find his tent, he sought shelter in a hollowed trunk of a dead tree, where he spent the next seven nights. Although he had an orange tent, the snow covered it up, keeping rescue planes from spotting it. After a bit of warmer weather, the tent appeared and dogs were dispatched, and Jason was found, less than a mile from his tent.

Dan Sommers was a 22 year old guide for the Charles L. Sommers Boy Scout Canoe Base in Ely. In August 1988, he was leading a group of scouts and two adult leaders on a wilderness trip north into Canada and the Quetico. Looking for a portage, he went into the woods and never came out. The scouts and their leaders waited for a long time. When he never came out or returned their call, they moved on to find the portage and to set up camp. They kept going back and looking for Dan, but he never appeared. Dan, it turned out, had fell and hit his head. When he got up, he was confused and wandered around. As he gained his senses, he realized his problem. He started navigating by the stars and the sun—placing sticks in order to determine the way south, which was the way he knew offered his best chance for rescue. Along the way, Dan built shelters by stripping bark from trees. While he was fighting his way through the woods and against the mosquitoes, the scouts (whose radio wasn’t working), headed toward a remote ranger station where they were able to summon help. A search was just beginning to get underway when Dan ran into another scout group. He had spent three nights in the wilderness.

Griffith adds details to make you feel as if you’re with both Jason and Dan as well as with the rescue parties and the scout unit that had lost their guide. He alternates chapters, jumping back and forth from Dan to Jason. After a few chapters, I felt like I was watching a tennis match and gave up and read Jason’s story (skipping over Dan’s), then went back and read Dan’s straight through. The writing is engaging and the book is exciting. I read this book in just a couple of days. Wanting to finish it and know how things worked out, I put all other books aside. I recommend this book, especially to those who like wilderness travel, but I still think that Deep Survival (I reviewed it late last year), is a better all around book.
-
For other book reviews by Sage, click here.
For Semicolon's Saturday's list of book reviews in blogs, click here.
Posted by sage at 10:13 PM