Catching up, Plus my favorite things

I’ve had about enough of lectures and decided to skip out on the late afternoon one and find a coffee shop and catch up on mail and blogging. Sometimes my attempts at humor get me in trouble. A month or so ago, I noted I only do those “meme” things for Southern women (at the time I made an exception for one “south of New York.” Seeing this, Daydream, who is both from the American South and now lives about as far south as one can without being a penguin (she’s on the down side of Down Under), made note of this and has now asked for my list of “10 favorite things.” I sort of feel like Julie Andrews in the Sound of Music… And since my daughter wants to grow up to be Julie Andrews, maybe one day she’ll put my “favorite things” to music. To those of you who are age-challenged, Julie Andrews sang about her favorite things in the movie.

But before I get to my ten things, I should note what my daughter said yesterday as I was dropping her off at school. I had NPR on the radio and they were discussing the Zacarias Moussaoui trial. When they mentioned execution, my daughter asked if that meant “off with his head,” obviously recalling the Red Queen in “Through the Looking Glass.” I explained that some countries do behead people, but that we’re more civilized and give them a drug to stop their heart. My daughter quickly shouted with all the indignation an eight-year-old can muster, which is quite a bit, “that’s just wrong.” I have never discussed with her my feelings on capital punishment (I’m against it), but I tried to play it straight. “He killed a lot of people,” I blurted out. But then found myself mumbling about how he himself didn’t really kill a lot of people, but how he could have saved a lot of people if he told what he knew. Of course, that’s assuming that whoever he told this told passed it on to another bureaucrat who passed it on to another bureaucrat until someone did something about it. “That’s just wrong,” she said. “If they’re that bad, they can just put them in jail for the rest of their life.” “I agree with you,” I said, as I helped her out of the truck and told her to run. I didn’t want her to be late for the second grade because she was discussing politics. As for Moussaoui, why do we want to make a martyr out of him, why don’t we just lock him up and throw away the key and forget about him?

In case my daughter forgoes a career as a human rights supporter or a lawyer for a singer, she can sing about these my favorite things…

1. Lazy afternoon naps in a hammock
2. The moon rising full over the sea, its rays glistering across the water
3. The crescent moon hanging low in the desert sky, just above the outline of distant mountains
4. The smell of sage in the desert after a surprise summer rain
5. The sharing of a meal with friends
6. The exhilaration of arriving at a summit
7. The savoring of a good book and good whiskey by a fireplace
8. The shears blowing in the wind announcing an approaching storm
9. Walking barefoot on the beach, hand in hand, at sunset
10. Big, Charlie Brown, snowflakes 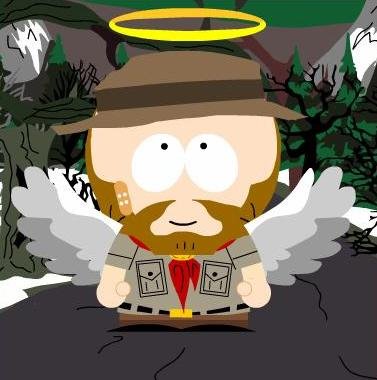 One thing that didn’t make my list is a portrait of sage created by Murf. I think Murf enjoys mocking (originally I used "annoy') her “blog friends,” by creating a "South Park" picture of them. Sorry Murf, I don’t wear neckerchiefs, and although I know you think I’m good, I don’t have a halo or wings. Give them to Ed!

If I don't get around to reading and commenting today, I’ll try to get back to catch up on reading your all blogs on Sunday.
Posted by sage at 4:57 PM