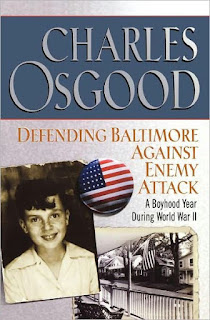 Charlie Osgood Wood was just shy of nine when Japanese planes attacked Pearl Harbor.  He and his sister were at an afternoon Christmas program at church when a nun came onstage and told them Pearl Harbor had been attacked and they needed to go home and tell their parents (this was before news became ubiquitous ).  Walking home with his sister, the two discussed the events, assuming Pearl Harbor's value was in its pearls and wondering if Japan didn't have enough pearls already.  He soon learned the truth as the horrors of war became known to the people of America.  Yet, it was a good time to be a child and Baltimore was far from the front lines.

Osgood (he later dropped "Wood" and used "Charles Osgood" as his professional name) spent a life in media.  He suggests that the manual labor of the liberty garden led him to seek an easier occupation.  At 83, he finally retired from CBS this past year.  In tributes to him, I learned of this book and sought out a copy to read.  In this memoir of a year of his childhood, we learn how the seeds of a lifelong career were nourished in a boy who loved baseball but also played the piano and organ and wrote poetry.

This is a touching memoir set in the first year of America’s involvement in World War II.  Although just a kid, Charlie begins to follow the world action by placing flags on a world map in his bedroom.  He does what he can for the war effort but sees a "victory garden" as questionable as it grows everything he hates.  He also wondered if the Japanese are planting "loser gardens."  When his father tells him about Japanese rock gardens, he is really confused.  There is a wonderful chapter about being mesmerized by the radio, which would later become his profession.  He speaks highly of radio as the place where he learned creativity and developed an imagination that would help him succeed in radio and later in television.  As a boy, he's also caught up with baseball.  He has portraits of his two heroes on his wall, Babe Ruth and Franklin Roosevelt.  Ruth’s portrait is in the prominent position because Roosevelt wasn't from Baltimore.  In a day without television, he writes about the movies and movie stars.  This is a look back at what America was like for a middle class boy who was close to my father's age.

Although we learn a lot about Osgood, this book is also a tribute for his sister, as the two of them shared the experience of being children as the nation when to war.   In his acknowledgments, he credits his sister for helping him remember as he created this delightful book.   I highly recommend this as a quick and enjoyable read.
Posted by sage at 10:09 AM