It rained all day on Sunday.  The sailing regatta scheduled for 1 PM was cancelled.  I went home and took a nap and when I woke, the clouds had begun to break apart, so I decided it might be a time for an evening kayak event.  Launching at Butterbean beach, we paddled down toward Pigeon Island.  The rains had cooled the air but the humidity was still high.  We had enough time to circle around the island (a five mile paddle), but there were so many dolphins playing around that we ended up just floating around and watching them feed and play in the water as the sun set behind clouds.  They are such graceful animals as they come up and roll down, sometimes even coming nearly out of the water when feeding.  There were many pairs of dolphins along with some mothers and their young.  It seems that they play with us as they'd be in front of us and as we'd approach, they dive deep and then appear behind us, splashing as if to draw our attention.  As the lights drained from the sky, we watched in awe.  Then, before all the light was gone, we paddled back to the landing, arriving just before the end of nautical twilight, at which time we'd need to have lights on hand to show our position to any approaching boat. 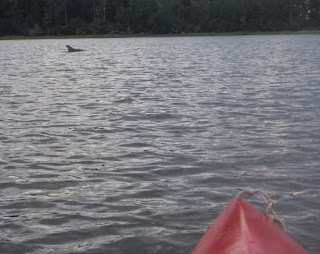 I wish I had brought my DSLR with me.  My point and shot waterproof camera takes nice photos but it isn't very fast and the light was dropping and I wasn't able to capture any of the great shots such as when the dolphins were nearly completely after the water or of their tails.   The shot below was taken last week.  As I was coming back onto the island, across the causeway, I saw the barge pushing up the Intracoastal Waterway and pulled off at the boat ramp and waited till I could take this shot (taken with an iphone).  When I was a child and lived near the waterway in North Carolina, there were lots of freight (mostly logs) hauled via barges.  This is the first barge I've seen on the waterway since I moved here--today it seems that most of the traffic along the waterway are pleasure boats. 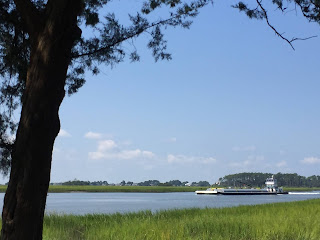