Day three, my final day in a three day solo paddle in the Okefenokee

I wake up around 3 in the morning on the last day of the year, shivering.  I’d gone to sleep to the sound of insects singing, an owl hooting, and fish jumping.  But now everything was quiet except the wind which had brought a change in temperature.  Instead of the lows being in the 60s, as it was yesterday, it mercury is moving down into the upper 30s.  Sleeping in a hammock with plenty of air below me and with a slight breeze isn’t working.  I get up and place a sleeping pad inside the hammock and crawl back inside.  The extra insulation helps and soon I’m back asleep.

When I wake back up, I’ve been back to Michigan and had been to a farmer’s market where I brought some kale from a friend of mine and his wife.  He doesn’t’ look well, but I am glad to see him for I knew he’d been diagnoses with colon cancer.  I turn to pay his wife for the kale and when I turn back around, he’s gone and I wake up, a little disturbed as this friend really does have cancer, but I have never known him to grow kale or to sell anything at a farmer’s market.

I crawl out of my hammock around 7 AM and bundle up with a heavy jacket and a hat.  It’s quiet.   The wind has died and light fog covers the swamp.  I build a fire and then heat water with the stove for coffee and oatmeal.  I eat my breakfast beside the fire and a read a few more poems by Burns, before packing everything up.  I was ten miles deep into the Okefenokee, near the center of the refuge.  The closest humans to me would be Chip and the group that he’s guiding, at Round Top Shelter, about five miles away.  It feels good to be so alone, but I’m also ready to get out and to get back home before the year ends.

At nine, I slide into my kayak and set out for the final leg of my solo paddle. The fog has lifted.  It is cool enough to wear gloves, but I take off my jacket anticipating a workout.  I am paddling against the current, but the flow isn’t that strong and I am able to make good time.  Most of the canal is wide.  When I pass the turn-off for the Round Top platform, which takes one around the southeast side of Chase Prairie, I leave the canal and explore a bit of the prairie.   I see no alligators, which isn’t surprising since the temperature is so cool, but I am surprised to see two turtles.  There are a few birds including a huge kingfisher and a redheaded woodpecker.  In the distance I hear the sound of sandhill cranes.  After returning to the canal and continue paddling eastward, I spot a canoe in the distance.  A man is paddling in the back and it appears as if he has a tent in the front.  As they get closer, I realize there is a woman and two kids in the front of the boat, wrapped up in a blanket.  They had spent the night at Coffee Bay and would camp tonight at Canal Run, which I had left just a little over an hour earlier.  They are the first people I’ve seen in forty-eight hours.

I explore Bugaboo Landing and a few side streams between the time I saw the family canoeing and arriving at Coffee Bay.  It’s not quite 11 AM, but I know this is the last place to stop for lunch (unless I want to stop at the privy two miles into the refuge, but that doesn’t sound like a place to eat and it’s still three miles ahead).  So I stop and eat at the same platform in which I’d paddled to with my Dad on the first of November.

After eating some peanut butter and crackers and fruit, I push the boat back in, and paddle the last five miles in about an hour and a half.  Somewhere along this section, the water changes direction and begins to flow toward the St. Mary's River and the Atlantic instead of through the Suwanee to the Gulf of Mexico.   As I approach the landing, a tour boat is taking a group of cold tourist into the swamp.  The woman leading the tour asks if I’d seen any wildlife.  Outside of a few birds, I hadn’t and I’m afraid her clients might be a bit disappointed.

After loading my gear and boat, I head over to the visitor’s center.  There, in the bathroom, I take a sponge bath and put on clean clothes.  A few minutes later, I am ready to go, but it is still early so I take the drive down to Chesser Island and walk around the old homestead there.  The white sandy yard surrounded by chicken coops, a corn crib, a hog pen, smoke house, cane mill, a few bee hives and various sheds with farming implements remind me of the great-grandparent’s sufficient farm.


An hour later, I head back toward Savannah, taking the backway, US 301 up through Nahunta and Jesup.  I am hungry but nothing looks good until I come into the outskirts of Jesup and spot B.J. Barbeque.  The place looks thrown together, but there is smoke coming from a hut in the backyard which is always a good sign.  I turn around and wait in line for one of the largest barbeque sandwiches I’ve ever seen.  I saw the woman making it and ask and learn that they put a third pound of bbq on their sandwiches.  That, along with some onion rings and a glass of unsweetened ice tea fills me and I drive the rest of the home happy and fulfilled. 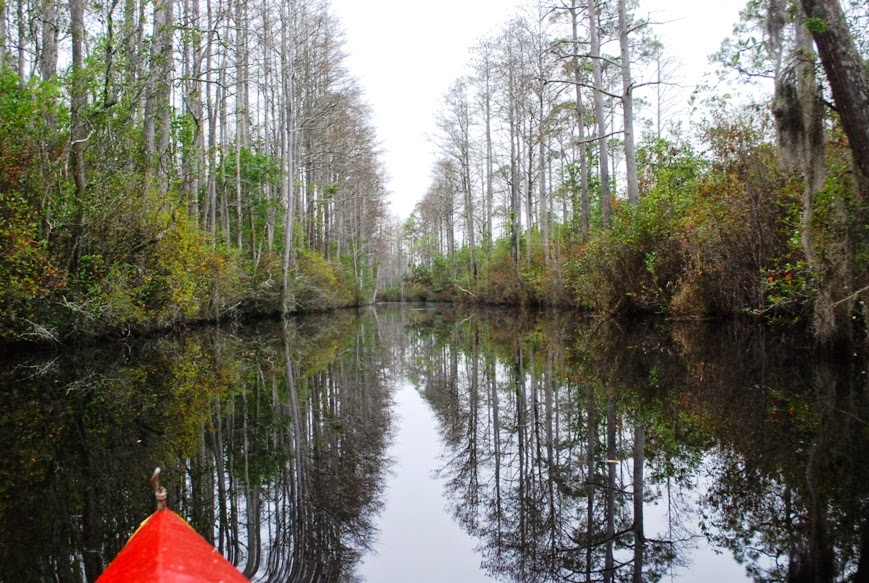