Journey on the James 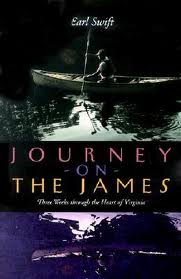 Earl Swift, a reporter for a Norfolk, Virginia newspaper and Ian, a photographer for the same paper, set out in the fall of 1998 to explore the length of the James River from its beginning in a spring bubbling up on a farm deep in the Virginia Mountains until it empties out into the Chesapeake Bay 430 miles later.  At first, Swift hikes along the stream bed.  Once there is enough water, he crawls into a canoe stuffed with extra flotation and with a double-bladed paddle begins to make his way down river.  At the end, when the river is wide and he’s fighting the tide and wind, he switches to a sea kayak.  As Swift sticks to the water, Ian follows along in his old Volvo, scouting out places to stop, buying up all the Gatorade he can find and supposedly taking a few photographs.   In telling his story on the water, Swift also explores the history of the region.

I must admit I had high hopes for this book and almost decided not to finish reading it.  Supposedly, according to the back cover, the author had hiked the entire length of the Appalachian Trail and paddled a kayak around the Chesapeake Bay.   I was expecting someone more turned into nature and the rhythm of the journey.  I never came to care much for the author or his side-kick.  At times, it seemed Earl was making light of their tenderfoot ways, but he never quite pulls it off in the way Bill Bryson does in A Walk in the Woods.  Of course, part of this may be that Swift was originally writing for a newspaper.  Bryson’s humor involves stretching the truth (or in some cases throwing it out the window), a talent that newspaper editors may not appreciated.  The lighthearted comments on their ineptness fell flat.  He’s not Don Quixote and Ian isn’t the faithful squire Sancho.  Also playing into my dislike of the characters is the lack of awe that Swift shows as he makes his way across the state.  Part of this may be due to the fact that he is never far from civilization and just about every bend in the river, Ian is there to hand him a Gatorade and a peanut butter and jelly sandwich.  At the end of the day, when they don’t want Mac and Cheese, Ian runs out for fast food and some beers.  This is no wilderness trip.
However, I do appreciate Swift’s insight into the history of this region.  From the first English settlement in the New World, through the battles between Native Americans and Settlers, to the Revolutionary, Civil and the World Wars, the James has a story to tell.  With a journalistic eye, Swift does a commendable job with the history.  He reminds his readers of the fights between civilizations (and makes the point that the native population in this part of the New World had develop quite an empire).  In a way, the story of the battle between the natives and immigrants is told backwards as he starts in the west where the last battles occurred late in the 18th century and then travels east where the first battles occurred early in the 17th Century.  I also gained appreciation for the hard work and ingenuity of early Americans (and their slaves) as they struggled to build a canal that ran up the river and help develop the western part of the state.   However, as soon as the canals were complete, the railroad came onto the scene, making the canals obsolete and eventually using their aqueducts to lay rails over creeks.  Swift also covers the Civil War battles as he paddles through Richmond and even mentions the role Newport News had in later wars as it churned out and continues to churn out warships for the American navy.

I don’t recommend this book for anyone interested in canoeing as there are a number of other canoe trip books that I’ve reviewed that I’d recommend first.  However, if you’re looking for a quick read on the history of Central Virginia, this book has a lot to offer.
Posted by sage at 3:34 PM