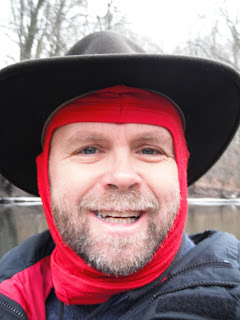 What a weird way to end the year. This morning we had heavy rain along with a line of thunderstorms and by afternoon, I was out with jeans and a t-shirt as the temperature got up to around 50 degrees… May you all have a nice New Year Eve celebration and a wonderful 2011. The photo to the left is a self-portrait taken on the river. 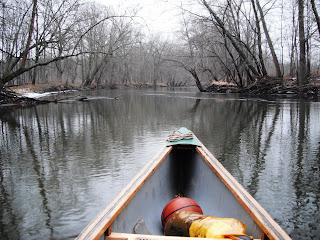 Yesterday, I decided that I needed to get outdoors and since there wasn’t enough snow to cross country ski, I decided to head out in the canoe. I put in right below a dam (there are a couple small dams on this river, but the backwater behind the dams are frozen, making it impossible to canoe). It felt good to be back in the boat for the first time since October and hear the water ripple underneath the hull and from the springs along the bank that feeds the river. I got to see squirrels play along the banks and in the trees, a muskrat that looked at first like a long in the water, to disturb ducks that take to the air at my approach, and to look at the hardwood swamps, the bark about as gray as the sky. It rained a little, but that was okay. It was only an off and on drizzle, no soaker, and I was prepared. Unfortunately, in winter, there are no leaves to muffle the sound and I could hear the highway, less than half mile to the west, all the way. But I also got to see lots of ducks, some geese and several swans who have decided to winter it out up here, along with a downy woodpeckers and a kingfisher. I snapped photos with a new lightweight waterproof camera that I got for Christmas and hope to take on my trip next year… Unfortunately, its battery gave out and I didn’t get any photos of the swans. Also, the point-and-shot isn’t nearly as quick as the SLR. But it was a good trip; I floated leisurely, taking breaks to drink hot tea and to do some thinking. There’s nothing like water to clear one’s head.


By the way, in case the photo above has you wondering, I wasn't planning on playing a game of hoops along the river. The basketball was found floating in a log jam (and it's a pretty good ball)! 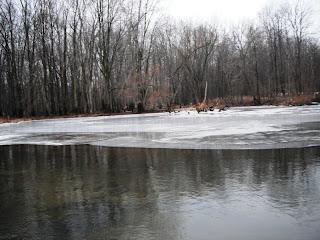