The CK&S (and new railcar under my tree) 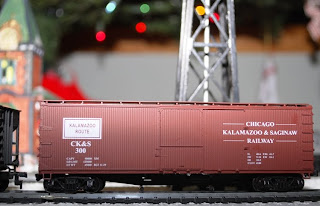 For the first time in years, I made an acquisition to my HO gauge railroad that has long operated under my Christmas tree. It wasn’t a large acquisition, just a new boxcar from the CK&S line (Chicago, Kalamazoo and Saginaw). The CK&S ran through this part of the country from the 1880s until the late 1930s. It was nicknamed the Cuss, Kick and Swear (or spit), a more appropriate name as the line that never made it to Chicago or to Saginaw. They started laying track in Kalamazoo and it ran northeast, stopping at places like Richland Station, Gull Lake, Delton, Wall Lake, Cloverdale Lake and Long Lake, before steaming into the town of Hastings. In Hastings, the line’s northeastward movement was delayed as the CK&S management fought with the Michigan Central’s management for the right to cross its track. The Michigan Central line was the only one serving this part of the county and the railroad didn’t want any more competition. Finally making it across the lines, they continued building a line toward Saginaw, crossing the Thornapple River and running by a number of other lakes. But the line only made it to Woodland, where it linked up to the Pere Marquette Railroad, with its line that linked Lansing to Grand Rapids. Later, the line was extended eight miles south of Kalamazoo, where it linked up with the Grand Trunk Railroad’s mainline: a Canadian railroad that entered the country at Port Huron and ran to Chicago.
-
At first, there were two passenger trains a day on the CK&S, that is every day but Sunday (like God, the railroad took a day off). The first train left Kalamazoo a little after 6 AM, travelling north then returning late in the morning. The second left in the afternoon and returned in the evening. I’ve talked to a few older timers from around here who’d gone to one room country elementary schools, but then took the train into Hastings for high school. This was back before 1937, when the train stopped running. In addition to passenger trains, a freight train headed north from Kalamazoo at mid-morning, dropping off and picking up box cars from various businesses and industries along the way, as well as shuttling cars onto other railroads for their transport across the continent.
-
Of course, the Cuss, Kick and Swear wasn’t the official name given to the line. The railroad’s management labeled it the “Great Inland Lake Route,” as the railroad skirted numerous lakes. With the coming of the train, folks living in Kalamazoo and other cities to the south began to build cottages around the lakes, where they’d spend their weekends and summer vacations. The railroad promoted hunting and fishing along its tracks and began running a summer Sunday Fishing Excursion that left Kalamazoo at 7 AM and arriving back at 10 PM (it was now a seven day a week railroad—at least during the summer season). Anyone along the line could wave a fishing rod to flag down the train. Another big draw to passengers was the annual Hastings Fair. So many people would be getting on the train in the towns and farms north and south of Hastings that the engineer would have to purposely slow the train down in order to allow the conductor enough time to collect the fare.
-
In the early 20th Century, it cost 93 cent to ride from Kalamazoo to Hastings. The story was told about a traveling salesman who regularly traveled this route. He’d get onboard in Kalamazoo and hand the conductor a fifty dollar bill. Unable to make change, the conductor would allow him to ride for free. He pulled this stunt many times until the station started to look out for him. Seeing him on the platform waiting for the train, they gave the conductor enough cash to make change. It was said the “shocked salesman” never took the train again.
-
The railroad had one notorious wreck. On the afternoon of July 15, 1909, the northbound passenger train crashed into the southbound freight just north of the hamlet of Shultz. The engineer and fireman on the passenger train were killed as they stayed in the cab applying the brakes. The crew of the freight train jumped before the crash, saving themselves. The two trains crashed and one of the locomotive boilers was thrown over 150 feet. Miraculously, most of the injuries suffered by passengers were minor. I hope my new CK&S boxcar doesn’t experience such carnage, but you never know as sometimes the throttle is in the hands of a twelve year old.
-
I better get back to shuttling cars... My railroad only as a few more days of operation before it is abandoned until another Christmas Season. May you enjoy this restful time of the year and have a wonderful New Year! Go here for more history on the CK&S and for one of my sources for this post.
Posted by sage at 7:11 PM