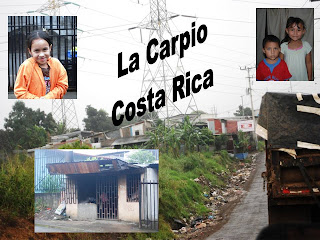 Garbage trucks rumble through the main street of La Carpio, heading for the dump south of town. As they negotiate the hills, their engine brakes rumble. “It’s hard for me to get a blood pressure on the first try,” admits a young nurse from . She came to this community right out of college and is living on a stipend for six months as she works in a clinic. “After six months, I’ll have to go back to the states,” she states sadly, acknowledging that her students loans will then kick in and she’ll need a real job. She’s been here two months, helping run in clinic in this town built on a landfill. Most of her patients are Nicaraguan refugees who came here during their country’s civil war. As aliens (many of them illegal), they have limited access to health care. has a universal health care program, but one has to be a citizen. That’s where this clinic comes in. The office is filled with files on patients (she explains that they are they’re trying to convert to electronic records to reduce the space that’s needed for paper files).
-
La Carpio is a dangerous place. On the corner are two police officers, a man and a woman, both heavily armed and wearing body armor. They smile when we cross the street to where a temporary clinic has been established. A part of the group with which I’m traveling, those with medical skills (there are four doctors and a number of nurses), have set up camp and are doing what they can to reduce suffering and to take the load off the clinic across the street. The hot tin building is filled with children and mothers. Sheets have been hung as dividers between exam rooms. A few old men and woman (who are probably younger than me) are also waiting to be seen. Eye glasses are being dispensed, along with antibiotics and vitamins and medicine to fight worms and other ailments. The clinic is surprising clean, and so are those who’ve come for help, but La Carpio is filthy. This is the end of the rainy season and there’s mud everywhere, along with the trash that blows out of the constant caravans of trash trucks. I’m told it gets worse as one moves further down the hill, toward the river.
-
I don’t stay long. I’m just here to see what my friends have been up to for the past week. But the images of La Carpio are etched in my mind. 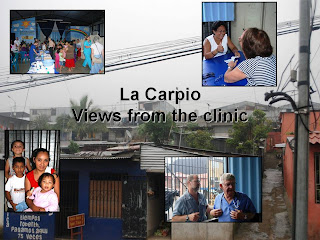 I spent last week in with a mission team. I got to work like a campesino, along side some Costa Ricans on a construction project. We worked five days helping a church to be handicap accessible. I’ve never busted so much concrete in my life! But I had fun and also had several free days got to tour around the country. We even went to see active volcanoes, but because of the cloud cover, didn’t get to see them… More stories and photos forthcoming. Costa Rica is a beautiful country.
Posted by sage at 7:44 PM