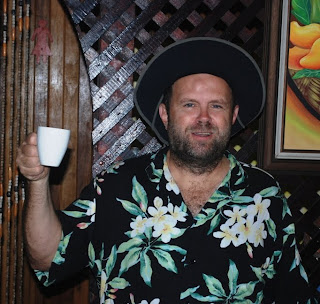 Those of you who read my last post (made this morning) was kind of like me viewing an active volcano… Sorry, I was working on this and obviously posted nothing, but it posted! This is my second post from my trip to . The craziness of my life has calmed down so maybe I can get back to posting on a more regular basis. The photo of me was taken at the lodge I refer to in this post.

We meet the group working in La Carpio at San Ramon, a town on the old Central American highway known for cigars rolled from the tobacco raised in the surrounding hills. It was only 5:30 PM, but the sun had set and darkness was fast descending as we set out in a caravan (a small bus and a van) toward La Fortuna. The narrow road snaked and twisted through the mountains, climbing steeply only to descend just as steeply only to end at a tight bridge. I wished it had been light as I would have enjoyed the scenery. The ride was uneventful with one exception. At the bottom of a hill, on a hairpin turn, a semi pulling a 53 foot shipping container cut the turn too sharp. Our driver slammed on the brakes, stopping the snub nose bus just inches from the trailer. It was shocking from my viewpoint, just behind the driver. I thought for sure we’d hit the trailer and we were close enough that I could have stuck my hand out of the driver’s window and touched the trailer. Our driver slowly back up, watching for the van with the rest of our group that was behind us. The truck was able to navigate through the rest of the turn and we gave a round of applause to our driver. 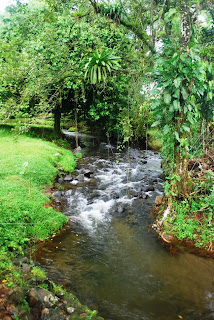 A few minutes later, we stopped at a roadside dinner. There were only a few customers who were overwhelmed by a group of 26 hungry gringos. There seemed to be just one guy working, but I think he called in his wife to help out and soon we were all fed. I ate a fried rice and shrimp dish which was delicious. A little later, we were back on the road and our driver informed us that if it wasn’t for the clouds, we could see Arenal, an active volcano west of La Fortuna that rises above the plain, to 1600 meters. One of my bucket list items has been to see an active volcano and I was excited at the possibility. For most of the history of , Arenal was inactive and considered to be a safe mountain. Then, in 1968, following an earthquake, the volcano woke up and has been providing constant fireworks ever since. With a flashlight, I serenaded my fellow passengers with stories from the guide book, embellished slightly and with references to Jimmy Buffet, of the volcano erupting and swallowing to villages. (I don’t know where I’m a gonna go when the volcano blows…) Some of them were not amused and may not have slept well that night. 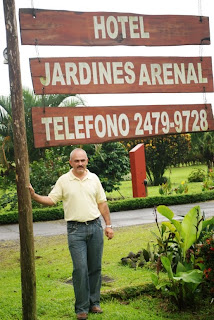 Our hotel was Jardines Arenal Lodge, a nice place that had been closed for the end of the rainy season. The proprietor, Hernan Blanco, was a friend of someone who was a friend of the guy who ran the place in Esparza, and had agreed to open up for us as we nearly filled his lodge. He said he’d closed the lodge because tourism has been way down (it’s always down during the rainy season but since 2008, he can’t afford the staff to keep it open. For $25 a person, we got a nice bed and room and breakfast and excellent hospitality. Most of the rooms of the lodge faced the volcano (or so we were told) and I was up several times in the night to see if I could see the fiery mountain, but it stayed cloudy. Once, at about 3 AM, I went outside and could see a few stars but saw nothing in the direction of the volcano. We weren't even treated to an earthquake or rumble coming down through the fog. 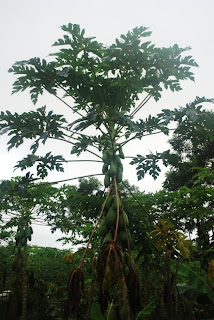 Daylight comes early in . At 5 AM, it was just beginning to lighten up, when a group of us met to take a morning hike. Hernan had recommended an old dirt path that had been the road into La Fortuna. It was warm and humid and we walked for a number of miles, stopping to admire the cows (this is cattle country) as well as the trees and the flowers and the fruit. Having just finished working with my daughter’s leaf project before traveling, I found myself looking at leaves on trees that were so big that they couldn’t have fit into a suitcase without being folded. There was one oak looking leaf that I figured I’d need a sheet of plywood, cut in half, just to press it. The country has such a diversity of plant life that I wondered if we hadn’t somehow found a backdoor into . Rain came and went, but it was too warm to bother us; I just had to keep my camera dry. 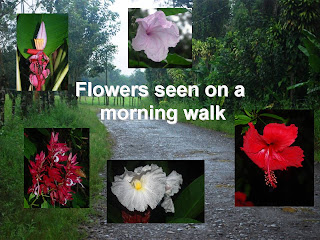 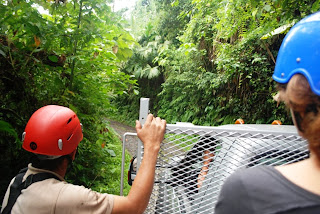 We got back in time for breakfast at 8 AM, and to pack up. At 9:30 AM, a group of us headed out to rain forest “canopy tour” at Ecoglide. We were given harnessed and a safety lesson and then hauled us on an over-sized truck bed up the side of the volcano, where we spent the next hour or so zipping down wires through and above the trees. There was even a Tarzan swing that wasn’t nearly as scary as I’d been led to believe. Our guides were good natured, joking that this was their first day on the job. We had a blast. However, I do wish our guides had been able to tell us a bit about the natural sights we were experiencing. 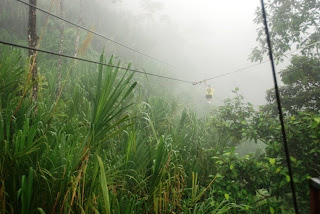 Afterwards, we met up with the rest of our group at Bali Hot Springs. The water for these pools is heated deep within the volcano. In the wet midst, it felt good to soak in the warm water and to stand under water falls letting the warm water fun down my back. The guide book said that on clear nights, one can soak while watching the volcano spit cinders up into the air and spew lava down its side. I’d loved to seen it; instead we saw clouds. 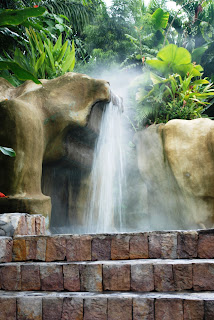 That night, we made it back to Esparza, having never seen the volcano. I assume it was there, up in the midst and that all of this wasn’t some big joke on me.

Below is a photo of the volcano in the clouds.... 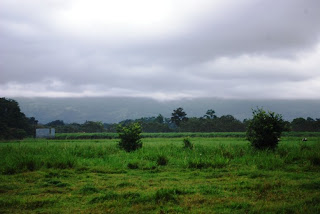