Mennonite in a Little Black Dress (A book review) 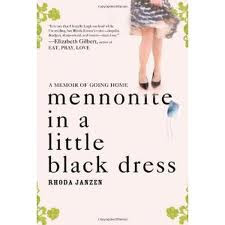 Even after the big move, things are crazy at work. But it's good, all except for my head. Fall allergy season is upon me with a vengeance. I just want to sleep, but there is much to do so I plod on. Here is a review of a book I read back in the summer. I heard Dr. Janzen speak at Calvin College back in the spring and she was delightful. So is her book.

Rhoda Janzen, Mennonite in a Little Black Dress: A Memoir of Going Home (: Henry Holt, 2009), 243 pages.
-
I love the title of this book! (But then, I’m a guy and the image of a wholesome woman wearing a lbd... well, let's not go there!) This is a memoir of overcoming tragedy by going back to her roots. At the age of 43, Rhoda Janzen’s atheistic and mentally ill husband leaves her for a “guy named Bob he met on Gay.com.” (12) They always leave after veracious veins, she quips. She’s left with a lake house she can’t afford (and probably never could have afforded it considering her ex’s poor work history). Ms. Janzen had been “raised on the notion that when a man cleaves unto a wife, he shall become one with her credit.” Such views created a situation allowing Nick (her ex-husband) “no obstacles” between “his style and her credit cards.” (84) Shortly after Nick left her for Bob, she’s in a car accident. Her plans for an academic sabbatical are ruined, so she goes home, back to her Mennonite roots.
-
As Janzen settles back in with her parents for an extended stay, we get an inside look at Mennonite culture. Although she acknowledges that the Mennonite history has mixed history concerning academic endeavors (she quotes a Low German proverb: “The more educated a person is the more warped.” [57]), her parents are well-educated and encouraged their children to pursue knowledge. They are also quite liberal, in contrast to their sons. (141) Yet, her mother seems to live in two worlds, the world of ideals and the domestic world that seems rather 1950ish, as she continues to make German foods that are a stable of the Mennonites. I found my mouth watering many times in reading about this strange culinary delights that was a horror to Janzen when she was a girl (other families didn’t each such stuff), but which as an adult she finds to be comforting. (I haven’t yet decided whether to store my book in my library with other memoirs or in the kitchen with my cookbooks.)
-
In addition to food, Janzen also explores the Mennonite world of clothing. As her father taught in a Mennonite college, he clothes came from “the Seminary Clothes Closet for Sacrificial Missionary Families Who Served the Lord with Joy and Gladness (and) were 100 percent polyester, with a humiliating elastic waist, and a crease stitched down the front of the leg, as if I were in early training to drive a Winnebago back and forth across the American heartland.” (80) Growing up, Janzen was tall and skinny and her mother had to sew additional strips of cloth onto her pants (but not in the hip way as “hippies” did to their blue jeans, for women would never wear blue jeans. In the clothing area, Janzen quickly revolted as she went out on her own, hence the name of the book.
-
Janzen also revolted by being drawn to guys who were opposites of what she had known at home. She saw intelligence as more important than nice, which is why she was attracted to guys like Nick. (83) She was able to overlook a host of issues (such as anger, a lack of responsibility, and an unwillingness to take his medicine for his depression) because he was smart. Of course, Nick only made fun of her Mennonite background which created a wedge between Janzen and her family. In the end, it was her family, not only her parents, but siblings and brother and sister-in-laws who proved to be faithful.
-
Throughout the book, Janzen discusses faith. Although she had stopped practicing any faith she acknowledges that she never completely gave up on faith. Just to talk seriously about religion in front of her ex-husband was suicidal; yet, she would hum hymns when he wasn’t present and kept hidden an Andy Griffith CD of gospel hymns. (156)
-
The book doesn’t end with a great revelation or with everything being better (and I’m still wondering why there’s that last chapter about Mennonite wagons, which was just weird). But it ends with the hope that things are going to be okay for Janzen. She’s dating again and getting on with her life. However, it’s a fun journey as Janzen is an engaging author. She has the ability to tell a story about being in a kitchen with her mother or sisters and have the reader in stitches, laughing. I came away feeling that Janzen has a good outlook on life and the old cliché, “laughter is the best medicine,” is true.
-
Now I’m waiting for Nick to publish his book and to get his side of the story…
Posted by sage at 9:19 AM