Last Night on the River (The Manistee) 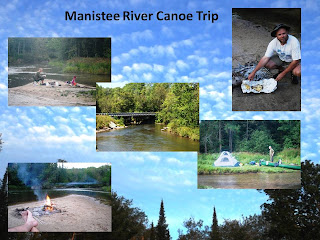 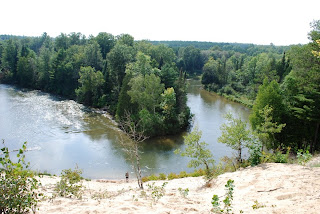 You don’t find a much nicer place to camp. The Manistee makes a big bend to the left and on the outside bend, to the south, Hopkins Creek flows into our river. The creek creates a small delta with a large sandbar jutting out into the river. We set the tent up back from the river, on higher ground. Knowing the bugs were going to be bad there with the tall grass, so we set up our living room and kitchen on the sand bar, where we could enjoy a nice breeze and listen to the water rippling around us on all sides. After hauling in firewood, Jeff cleaned the fish as I built a fire and lit up the stove. Soon, rice was boiling, followed by a can of beef stew as we didn’t have enough fish for dinner. We’d caught plenty of fish in the morning but had let them go as we had miles to cover and no cooler in which to keep them. In the afternoon, we’d only caught two keepers. These I placed in foil, sprinkled with Dash and laid slices of lemons on top. As coals formed, I raked a bed of them to the side of the fire and laid the foil package on top, turning it once. Soon, we each had a nice appetizer, a trout a piece to go with our rice and stew. We burned the can of stew and another one of fruit out in the fire to keep the raccoons from playing with it during the night, then sat and watch the light drain from the sky. The breeze died and the smoke from the fire hung over the river. Slowly stars appear. We had a clear view of the northern sky, the constellations around the North Star. The Dippers, Queen Cassiopeia, King Cepheus and Draco the Dragon were all brilliantly displayed in the dark northern sky. We sipped brandy and whiskey and smoked a cigar. I ate some peanuts, tossing the shells into the dying fire. But mostly we talked. I spotted several meteors, one fireball streaked from high above down toward the river, covering ½ the sky. When the bugs started to find us, we retreated to the tent and the security of netting. 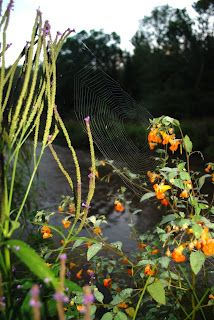 I slept hard and woke in the predawn morning. The air was still. It was warm and humid even long before the sun peaked over the trees. I went over to our kitchen sandbar and fired up the stove for coffee. Interestingly, I realized that I’d left the bag of peanuts by my chair. A ‘coon had been into the bag and had left a nice collection of shells on the ground, but had not eaten all the nuts… After oatmeal and coffee and a period of time to read, we packed up and fished out way down to the bridge at US 131. There, we loaded the truck and headed south, stopping in Cadillac for a late lunch. 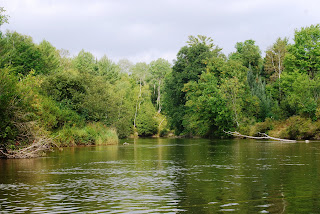 A friend and I canoed the Manistee from Sharon Michigan to the US 131 Bridge. We put in late Sunday afternoon and came home Tuesday night.