Ghost Train to the Eastern Star (A Book Review) 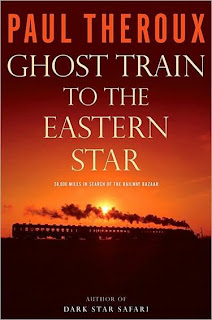 It's cold up here this evening. As I spent today waiting for my daughter's choir practice, I had time to finish this book review. Enjoy.
-
Paul Theroux, Ghost Train to the Eastern Star: (: Mariner Books, 2008), 492 pages


Favorite Quote: “Travel is at its most rewarding when it ceases to be about reaching your destination and becomes indistinguishable from living your life.” (367)

The mature Paul Theroux, now in his 60s, seems bent on discovering how the world has changed in his life as he revisits the travels of his past. In the mid-1970s, at the age of thirty-three, Theroux set off on a train trip that took him from his home at the time in London, through Europe to Turkey, across Persia and India, through Southeast Asia and Japan and finally to Europe across the Trans-Siberian Railway. That book, The Great Railway Bazaar established Theroux as a travel writer and was the first of his books that I read, some twenty years ago. Early in the new millennium, Theroux traveled overland through Africa, revisiting many of the places he‘d lived as a Peace Corp volunteer and later a college professor in . Afterwards, he published Dark Star Safari, which recounts his journeys in after a thirty-year absence. In a similar vein, Theroux next set out to cover the same tracks he’d written about in The Great Railway Bazaar. Although he no longer lives in , he flies to the city to begin in his journey. His first notice of the difference in his journey is in the crossing of the . In 1973, he crossed the channel on a ferry boat. Today, he boards the train in and is whisked through a tunnel, under the English Channel, to and soon is in . Although this train was ultra-modern, that would not always be his experience in his travels.

Theroux’s journey takes him through poverty-stricken Eastern Europe to . In 1973, he traveled from through and on into and . This trip, he‘s unable to obtain a visa for Iran and is nervous about the political troubles in Afghanistan and Pakistan, so he heads northwest and travels through many of the former Soviet states that are now countries. Starting in , he makes his way to and through and then flies to in . After visiting the Sikh holy sites, he takes the train south through the subcontinent, checking out the development of the nation as well as religious sites. He heads next , an island nation devastated by Civil War. The train hugs the southern coastline through villages rebuilt after the deadly tsunami of 2005. 1500 people drown on the train that fateful morning when the wall of water swept the train from its tracks. Next, he flies to and travels by train from to and on to a small resort in the mountains which he’d popularized in this earlier book. After , he flies to and takes the train first north and then south to . He then heads back to and travels through and then on a bus to Saigon where the travels north by train through , stopping at and and then on into , where he flies to . He travels throughout on train and then flies to , where he picks up the Trans-Siberian Railroad back to .

“I avoided making friends with politically powerful people, Theroux said, “because the nearer you are to such people, the more morally blind you become.” (63) That said, Theroux meets briefly with Prince Charles when in . (174-175) However, this appears to be an exception. Theroux generally avoid government connections, preferring to meet local people or authors. The book is filled with political observations. In , a rich nation ruled at the time he was there by Niyazov, a madman, Theroux suggested the country be called Loonistan and considered it an example of what happens when political power, money and mental illness are combined. Niyazov had banned beards, gold teeth and ballets. But he had money that came from gas wells. Speaking to an American there, he was told that the capital Ashgabat was you’d get if you mixed and together in a blender (105). Niyazov published his own book which “contains more exclamation marks that a get-rich-quick ad..” (107) Niyazov promised his reader that if they read it three times, they would go to heaven (a promise Theroux suggested wasn’t enough to get him to read it two more times). In , the only country where he “met nothing but generosity and kindness,” the people were the “most ill-treated, worst-governed, belittled, and persecuted of any people I met.” (267)

In , a country where he had once taught in a university, was the most changed of the places he’d visited. He spoke of it being filled with cameras and snitches, where there was little privacy, but great loneliness because “Singaporeans are encouraged to spy on each other; the rats are rewarded.” (319). Although the place was “safe and clean,” Theroux found it to be a city-state of “potting kittenish women and frowning nerdish men.” (324) “Because they can’t criticize the government,“ Theroux suggests, “they criticize each other or pick on foreigners.” (324). Theroux has harsh criticism for Lee, Singapore’s puritan leader, a man who praised the Chinese handling of the1989 Tiananmen Square protests and who bans chewing gum. Yet, even in this strict society, Theroux found the dark underside that included, to his horror, underage prostitutes being smuggled in from other Asian countries. In fairness to , Theroux may have an ax to grind as his teaching contract was not renewed due to political reasons and he found himself criticized in the local media while there.

Interestingly, Theroux made his travels at the height of the American engagement in . He found, in his 28,000 mile journey, only two people who supported the invasion: a man in who also wanted the to also invade and a man in who thought it the only way to deal with Islam. (204)