Busyness has returned and the past couple of days have been crazy and I haven’t been very good at keeping up with reading other blogs and even less able to write blog posts. But I have a few minutes, so let me catch you up a bit.

I’m working on several stories for my blog: a couple from experiences along the Appalachian Trail, an essay containing personal stories on capital punishment, and a book review. Stay tuned! But since I can’t seem to finish any of these, let me talk about the weather. It’s been cool here, even though it’s supposed to warm up into the low 80s today. Not to far north of here, they were warning of isolated pockets of frost yesterday morning.

Two bloggers, whose writings I enjoy, have written books. Mark C. Durfee, “The Walking Man” has published a new chapbook, Stink: the Poetry and Prose of Detroit. I enjoy the raw and honest emotions captured in his poetry, which often reflects the struggle of the city. In what little spare time I’ve had, I have been reading through this collection of writings, some of which I remember from his blog. His poetry reminds me of John Beecher’s work, especially his writings in the late 30s and early 40s. 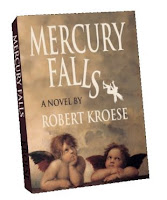 Diesel (Rob Kroese) over at The Mattress Police has a new novel titled Mercury Falls. Diesel is very funny. His novel is about the apocalypse (not normally consider a humorous topic, unless you consider that The Late Great Planet Earth, which sold more copies and than just about any other book (on any topic), was written by a tug boat pilot on the Mississippi... Well, it was good enough for Mark Twain. Mercury Falls is due out later this month, of course, that's assuming Christ doesn't return beforehand. If that happens, I’ll be disappointed as I won a copy and wouldn’t want to read old news. Hal Lindsey may also be disappointed as there is no way he could have spent all the money he made on The Late Planet Earth.

For those of you who live in fear of the rapture (a concept which I don’t think is particularly Biblical, especially in the pre-tribulation fashion that it’s often depicted), you can now sleep a little easier by taking out rapture insurance for your pets. After all, they'll surely will be “left behind” and you'll want to hedge your bets. What will people think of next?