I've mentioned being in the Yucatan earlier this month. While it was kind of a business trip and I don't talk about work, I did get out and enjoy the countryside as well as play some hoops. 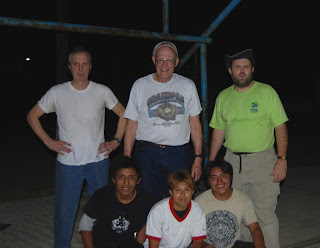 I played basketball several nights. On our first night in town, us old guys were taken to the cleaners by these younger kids (whose ages ranged from 17 to 21--our ages ranged from 52 to 67!). The oldest of us "old guys" wanted to know why the guy in the middle was named Anna. At breakfast the next morning, we gave him a biology lesson. He was so humiliated having been beaten by a girl, that he played ever harder the next time. Even though we weren't as fast as the kids we were playing against, we began to use our height to our advantage. I liked playing against Mayans, I felt tall! 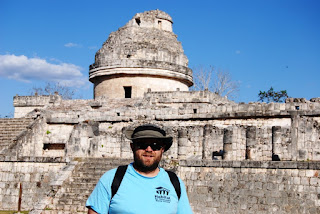 Another highlight of the trip was a visit to Chichen Itza, one of the largest Mayan ruins in Central America. Behind me is the Observatory--a really neat building. These guys were great astronomers. 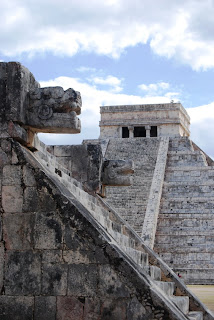 The Pyramid of Kukulcan is the highlight of Chichen Itza. Snakes are a favorite subject on the stone work. Their worship seem to focus on the sun, snakes and the male anatomy. 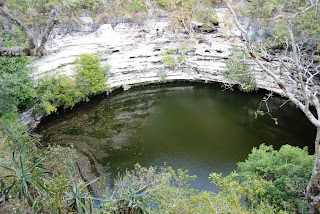 This is one of two cenotes at Chichen Itza. There are no rivers in the Yucatan, only sinkholes that open up to underground rivers that flow through the limestone. 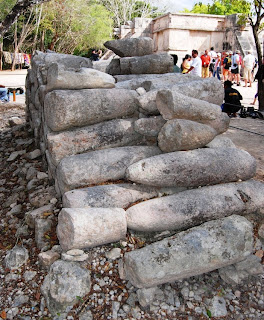 Although these look like artillery shells, they're actually stones phalluses... Use your imagination. 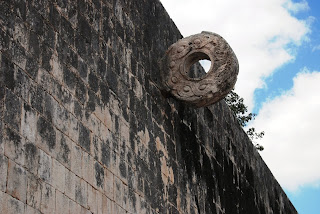 This was the location of the Mayan Final-4 for several centuries, the last big dance occurring long before Columbus arrived and turned the hoop 90 degrees... 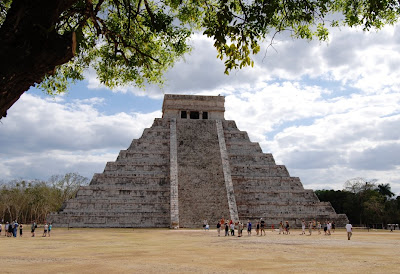 A closing shot. You can enjoy these photos without local craftsmen trying to gain your business, crying out as you approach: "one dollar, one dollar." If you ignore them, as you walk away they change their pitch to "ten pesos, ten pesos," amounting to a 30% drop in price! I couldn't believe how many vendors they allowed inside the grounds. They line the paths between the various parts of the site. I've also visited Copan, another Mayan center in Honduras. There, I only remember vendors outside the gate. Once you were inside, you were free to look at the sights without having to beat off salespeople.
Posted by sage at 9:15 PM