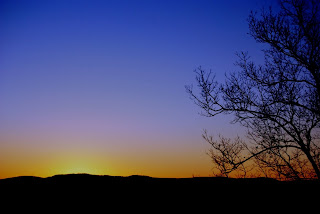 Sunset behind the Georgia Mountains
This is my last post for 2008.

It’s going to be good to have this year over and done with. I hope 2009 will be better for us all. It doesn’t have to be an overly prosperous year, but for my chance of retiring sometime in this century, I hope we don’t lose any more ground on the economic front. I’d like to see world peace, but will be satisfied to see a little less war. I’d like to take more time off, but with a large construction project looming on the horizon, I hope to make the best of the times I do get away. And that’s what I’m doing now, lounging around in the Georgia Mountains, taking time to hike and sleep and read and journal… I’m staying at Amicalola Falls State Park. I was here once before—this is where you start your hike to Springer Mountain, to being the Appalachian Trail. I’ll have write about that some time, but not today.

The sky has been clear and this is a joy. In the first three weeks of December, we’d received less than 8 hours of sunlight in West Michigan. I can use sunlight. As any reader of this blog knows, I like watching the sky. . Last night I sat savoring the sunset, enjoying the red band that lingered along a distant ridge long after the sun had disappeared. Above the ridge appeared a pencil thin crescent moon. Above that was Venus. At six this morning, I looked out the window and back into the west. The winter constellations were already setting, reminding me that every season comes to an end. Orion was no longer visible and his faithful dog, Canis Major, was slowly dropping behind the ridge. A bit higher were the Gemini twins. I pulled back the curtains and laid in bed watching the stars fade and light return to the ridges to the west.

To leave the path a little better than I found it.

To never be so busy that I not appreciate a sunset or sunrise, or stand in awe and watch a thunderstorm, or to be amazed at a snowfall, or to value the serenity of a fire.

To savor good food, drink and entertainment, but all in moderation knowing that both hoarding and indulging cheapens the experience.

To be thankful for what I have, for those who have helped me along the way, and for the Creator.

Enjoy New Year’s Eve (but don’t enjoy it too much)! May we all find happiness and contentment in 2009. 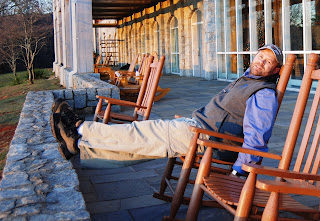 Sage, watching the sunset from the porch at Amicalola Falls Lodge.