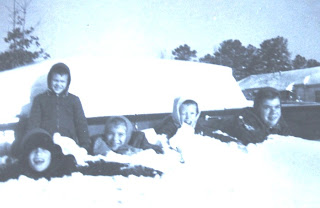 Sorry, I’ve been busy this past week, with work demanding a lot and the holidays upon us. We’re having an extended period of snow (which makes me happy). Here is a memoir of me as a nine year old boy, inspired by photographs I came across last summer when visiting my parents. I apology that these black and white shots aren’t’ the best of quality, but they’re the only photos I found from this snow. The first photo shows Bubba (in front), my brother, Denise, Sage and (I think) Bubba and Denise’s older sister. The second photo is of my brother (on the left), Denise and me.

I fell in love with winter in the 3rd grade. January 1966 was a particular snowy year in Petersburg. In the middle of the month, there was a dusting snow for my birthday. But the real snow came at the end of the month, when the eastern seaboard closed down due to a massive blizzard. Richmond, just to our north, received over 40 inches of snow within the last few days of the month. Everything came to a stop and most important to those of us attending Walnut Hills Elementary School, we were given an extended winter break. It was like a second Christmas holiday. Every day we’d trek out, pushing through knee deep snow as we may our way through the alley behind our houses to the hill on the road between Bishop and Warren Street. There, we’d spend hours sledding, our run going crossing Warren Street and then through a path in the woods that headed toward Fort Hell. We’d then hike back up and do it again. This was a rather safe run as the street we sledded on was the edge of the development and few people drove up it when the weather was good. With the snow and ice, in the days before four wheel drive, it was nearly impossible for vehicles to make it up the hill. All the neighborhood kids convened at the hill. Most were older than us; my brother and I mostly hung out with Bubba and Denise, who lived next door. When fatigue overtook us, or our clothes became too cold and wet, we’d retreat back inside where mom would fix us hot chocolate or a bowl of snow cream as our gloves and coats dried over heat vents. 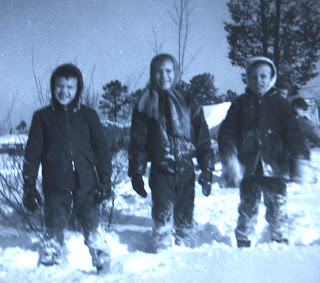 The family at the corner of the hill, whose boys were several years older and always taunting my friends and me, took it upon themselves to take a hose and spray the hill down with water at night. With fresh ice on the hill, it was a fast run and we were assured no cars would try to make it up the hill. They also scrounged up a metal oil drum with the top cut out in which they’d keep a fire going. As construction was beginning in the woods south of Warren Street, with streets being laid out and a few homes being built, there was plenty of scrap lumber available. Someone had even brought smudge pots, black metal cylinders that were used to mark hazards like the end of pavement in construction areas, and used these to provide a little light along light the sled hill at night. My brother, sister and I felt left out as our parents didn’t let us go out at night. But during the day, for the week we were out of school, we got to enjoy the hill as we shared our sled, which was one with metal runners and a wooden deck and a wooden slat that allowed you to twist the runners in an attempt to give the vehicle some maneuverability (which we needed as we made our way through the path and into the woods).

Of course, what was joyous for us wasn’t for our parents and other adults in the neighborhood. Many families were stuck. My father, unable to drive our newer car, was able to get around in our older and heavier Buick for which he had tire chains. Early in the storm Dad stopped by one of the fabricating plants he inspected and borrowed a few sheets of steel. Placing these in the trunk, over the back axle, he was able to go just about anywhere. But other families were not so lucky. We heard stories about families being stranded along I-95 and how farmers along the freeway took in families whose cars were in the ditch. But that didn’t affect us kids. We were happy; we were out of school for a week. However, I’m sure that by the time we returned, more than half the moms in Walnut Hills were on the verge of losing their sanity.

We only lived in Petersburg for three years; that next summer we moved back into North Carolina and near the ocean, where it seldom snowed. I’d be in my thirties before I saw another blizzard and every snow since has been measured against the one we experienced in ‘66.

For another story about living in Walnut Hills and our local Civil War site, "Fort Hell," click here.