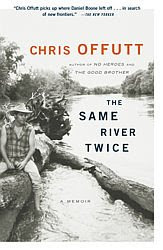 About a quarter through the book, Offutt quotes Heraclitius, from ancient Greece, “You can’t step into the same river twice.” (54) Yet, metaphorically that’s what Offutt attempts to do, to step into the same river twice. This book tells of him leaving the security of home for a decade of wandering, and then finally settling down in his own home as with his wife who’s pregnant with his first born child. Again, there is stability in his life, yet the river remains, connecting him to the larger world. In telling his story, Offutt alternates between his wife’s pregnancy and his years on the loose.

Offutt begins his journey in his Kentucky home in the hills of Appalachia. He acknowledges that the popular view of Appalachia is less than flattering, “a land where every man is willing, at the drop of a proverbial overall strap, to shoot, fight, or f—k anything on hind legs. We’re men who buy half-pints of bootlegged liquor and throw the lids away in order to finish the whiskey in one laughing, brawling night, not carrying where we wake or how far from home…. The truth is a hair different,” he confesses. (19-20) Offutt’s first stop is New York City, a place he describes as having half the people being crazy and the rest being therapists. (36) While in the big city, Offutt, in good southerly fashion, defends a homeless woman that’s being harassed. After the incident, they get together and he discovers that she isn’t a she. He flees, and later hooks up with a black woman who serves as his mentor. In a way, this sounds tripe and a bit racist, a southern boy shocked at the big city and then learning the ways of the world from a black girl, but Offutt pulls it off well. Offutt describes sex using the analogy of sharpening a knife against a whetstone and as a baseball game. (And no, he doesn’t credit Meatloaf, whose song, "Paradise by the Dashboard Lights," also describes making love as stealing home in a baseball game.)

Offutt’s crisscrosses the country in this travels, stopping for a while in Minneapolis, Boston, and Flamingo, Florida. He does a stint with a circus travelling through the South. He notes that “Kentucky produced both Abe Lincoln and Jeff Davis.” And like his ancestors from the Civil War, Offutt see’s himself being loyal to no direction.” (109) Along the way, he identifies himself with Daniel Boone and Christopher Columbus, always striking out for what’s new, yet both whose lives ended up less that happy. It seems Offutt is following in their footstep. Each new location gives him opportunity for more adventures and misadventures: opportunities for drinking, drug use and experiencing life from the bottom of society. At one point, he notes that “like rotgut and rainfall,” he’d found his lowspot.” (160) He goes home for his brother’s wedding where he’s confronted for his lack of goals and finds himself feeling inferior, yet he also realizes that he’s the loved son and that his brother, by staying home and working hard, has been trying to earn the approval of the family. (120f)

Along the way, Offutt makes observations about life. He describes the human race as Icarus, “with melting wax and loss of altitude” (131) and the “underclass of evolution.” (133) His salvation comes from meeting Rita, his wife and the princess that helps him rise into respectability. With his wife’s prodding, he applies and accepted into the Iowa Writer’s School (obviously Offutt left out the schooling he’d picked up along the way as he’d quit school to go on the road). At the end of his book, like most new fathers, he’s excited and tells about it as if he’s the first to experience such joy, but also aware of the responsibility of he has and hoping to break his family’s mold of bad fathers.

I enjoyed this book. Although I’ve managed to avoid many of Offutt’s low spots, I found myself relating to the way Offutt explores what it means to become a man and a father and, as he travels around, he sees himself tied to the land and linked to history. I also agree with one of his mentors who remarked, “The West wasn’t tamed, it was corralled for slaughter.” (67) And finally, like Offutt, I want to hibernate in summer and get restless to strike out for new territories when the weather turns chilly. (54)
-
Click here for more of Sage's book reviews.
Posted by sage at 9:42 AM