A Lament for a Sheepherder 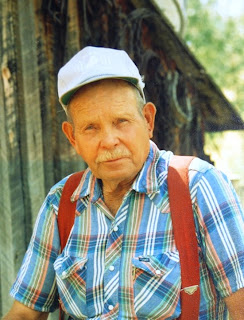 I digitally copied the photo of Eddie from a print I took in the mid-90s. I took the second photo of sheep on Cedar Mountain in the summer of 2007.
-

I got word two weeks ago that Eddie died. I liked Eddie and had over the past few years heard he’d been slipping. When I left Utah nearly five years ago, his hearing was fading and he was having a harder time getting around. He’d just sold his herd, but was still helping the man who brought his sheep. He no longer went up on the mountain or out into the desert every day, but he was still making the trek two or three times a week. I last saw him two years ago. Then, his eyes were going; macular degeneration, I think. He was no longer able to drive. About a year ago I heard he was in a nursing home. Age and illness had robbed this man of the things he enjoyed, running up and down the mountain in all kinds of weather and basking in the beauty of God’s creation. Now, he’s at rest.
-
Eddie proudly proclaimed to everyone that he was a sheepherder, even though for him it was business. He hired a herder to stay with the sheep, a man who lived in a sheep wagon and who generally liked being along. Occasionally his herder would come to town for supplies and drink, and after a few days of the latter, he’d go back up on the mountain or out in the Nevada desert, where he’d dry out while tending the sheep, protecting them from predators, and hauling drinking water. Eddie made almost daily trips to check on his herder and the herd, bringing in groceries and feed for the horses and helping him haul water for the sheep. I think he had around 1600 ewes in his herd, which considering that most ewes have twins, equals a lot of lambs. When that many animals are away from a watering hole, a lot of water has to haul. Such a herd also required a large number of rams, along with horses and dogs to help with the work. At night, Eddie did the books and dealt with government leases. Although Eddie was one of the largest landowners around, he still leased land for grazing, especially for winter pasture in eastern Nevada.
-
Eddie lived by the rotation of the earth. In the summer, the ewes and lambs would feast on the grass in the high mountains plateaus. Late summer or early fall, the lambs were culled from the ewes and rounded up to be trucked to market. It was always a guess as to how long to wait. The longer the lambs ate the mountain grass, the heavier they were and the more profit they’d bring. But there was always the risk of early snows trapping the herd and he’d have to haul in feed, which would eat up any profit he might have made. And then there was the year of the fire. With much of his range burned, the lambs had to be sold off early, when they were a good 20 pounds light. On another occasion, he told about an early snow. The lambs had already been sold, but the ewes were still on the mountain. The snow was so deep, his truck got stuck and he had to spend a day walking out, while his herder stayed with the herd which was nearly immobilized by deep snow. Getting back to town, he hired a bulldozer to come and clear a path so the sheep could make it down the mountain. In the fall, as the aspen turn bright yellow, he’d ride a horse, trailing the sheep down the mountain and around the south end of town, using a 100 year old livestock trail. As the days shortened, he and the herder would move the sheep from one alfalfa field to another, where the sheep would eat the remains left from the harvest as they moved toward their winter pasture in Nevada. By December, the sheep were roaming around the deserts of eastern Nevada, between Caliente and Pioche, where they ate sage and what grass was left from the summer. If there was snow on the ground, it was easy work for the herders for the sheep could also eat snow for moisture. But if there was no snow, Eddie and his herd would have to drive the old tank trunk to the warm springs at Panaca or another spring on the west side of his property, where they would fill it up and haul the water back to the sheep. 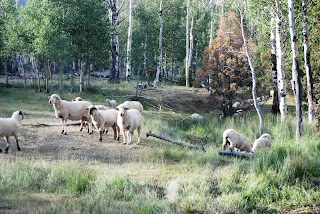 -
At the end of winter, Eddie’s sheep got to ride in trucks back east to the lambing barns near Kanarraville. The sheep would first be sheared, usually by men from Australia and New Zealand, who sheared the herds in the American West from late February through April, then returned home, shearing sheep Down Under in their spring which is our fall. Lambing came after shearing (there’s less problems with birthing when the ewe is sheared). For a few weeks, Eddie would hire a host of people to help him by serving as mid-wives to the ewes. Then, as the weather warmed and the snows retreated on the mountain, they’d moved the herd up to the mountain, where the cycle would repeat itself.
-
“How are we today,” Eddie would ask with a big grin, whenever he greeted anyone. He was always cheerful even though he’d known his share of heartache. His wife, the love of his life, had died of cancer a few years before I met him. In his living room was a photograph of a large aspen tree. When the tree was small, Eddie had carved a heart and added his name along with the names of his wife and daughter. Carving on aspens was common among sheepherders. Eddie had forgotten about this tree, but as it grew so did the carving and one day a hunter came upon it. He photographed the tree and gave it to Eddie as thanks for allowing him to hunt. Eddie was pleased.
-
Eddie also loved his daughter and doted on her and made sure she was well cared for. She was a few years older than me and mentally challenged. Although I never asked, I couldn’t help but wonder if his wife’s cancer and his daughter’s limited mental capacity had anything to do with those blinding predawn sunrises from the west that Eddie and his wife experienced back in the early 50s. Above ground nuclear testing was common in that decade and although the government assured them they were safe and there was nothing to worry about from the white ash sometimes fell afterwards, we now know otherwise.
-
I am thankful for the few times I took Eddie up on his invitations to take a day off and ride with him. We’d head out early. Sometimes we stop for breakfast or coffee. In his truck, he’d have some groceries and a few tools to repair fences or gates, maybe a salt block or two. Depending on where the herd was located, we’d drive an hour or two, all the while Eddie telling stories about his dad and about the sheep business and about how lazy the cattlemen could be (there is little love between sheepherders and cattlemen, a feud that goes back into the 19th Century). Lunch was always at the sheepherder’s wagon. In the winter, we’d all go inside to get out of the cold and wind. The smells were enchanting. Pinion burned in the stove as coffee perked. Mutton was always served. Some days we’d eat it with potatoes and carrots, other days we’d have it in a sandwich, the bread lathered with mayonnaise and cheese. We’d wash it all down with coffee.
-
Some afternoons we’d scout out the next spot for the camp. Others, we’d take the tank truck out for water. As we drove around, Eddie would show me how he cared for the land. He’d show me where he had been working to stop erosion and to restore the grass that use to be more abundant. Over-herding animals in the first half of the 20th Century had taken its toll. When Eddie got into the business, he decided to run half as many sheep on the land as his dad and the previous tenants. His decision was slowly paying dividends and he was proud of his work and of his land. After he’d do the chores for the day, as the sun was dropping in the sky, we’d head back toward town.
-
“When I was in my 20s and just starting out, I was told by another herder that sheepherding was a young man’s business,” Eddie confided in me one day. “Now I believe him.” And now Eddie can relax and let the Good Shepherd take over.
Posted by sage at 5:25 PM