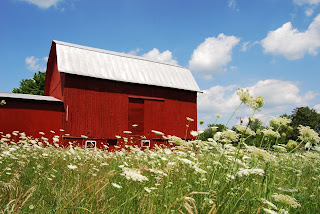 Although I generally prefer winter to summer, I do enjoy the watching the fields of Queen Anne’s Lace dancing in the breeze. I saw this barn last Thursday and pulled over to photograph the barn as a backdrop for a field of the flowers.

Today is Election Day here. One of the hotly contended races is for “Drain Commissioner.” There are eight candidates for the job and, when they were interviewed by the paper, none of them answered in the right way the one question that would have made me want to vote for them. When asked if they thought the position of drain commission should be an elected or an appointed position, they all felt it should be an elected position. WHAT? I’m not even sure some of these candidates are qualified to clean out the “S-trap” under a sink. Only a few of them are claiming training or experience in hydrology. But most of them, the exception being the one person with a degree in a relative field, have had professional portraits done so they could plaster their mug shot on poster boards. For an elected position, the drain commissioner job pays well.

Another hotly contended race is for Sheriff. I don’t care for Barney Fife, our current Sheriff, and I’m glad the local police chief is running against him. Twice I’ve heard this guy speak at gatherings and he’s made me mad enough that I would like to have walked out on him… One of those times I couldn’t have walked out if I had wanted to because it was in the jail. He served us regular jail food and bragged about how well he treated the prisoners while saving the county money. The jail is a dump and feeding prisoners large helpings of starchy mac and cheese, a fatty pork chop, over cooked green beans (which I hate) and a slice of white bread isn’t exactly treating them well. Most anywhere there is a sign for our current Sherriff, you also see one for our current Prosecutor as if they’re running on a team ticket. The real reason Barney Fife saves money at the jail is the Prosecutor. This guy can’t get a conviction! Unless something happened recently that I’m not aware of, he’s lost ever case that he’s tried in front of a jury (but he brags he’s against plea-bargaining). Getting a new Prosecutor might mean that the defense lawyers around the court house will actually have to start earning their daily bread.

Finally, I’ll be glad for the election to be over so everyone can get all those signs out of their yards. It seems most everyone has two or three signs planted in their front yard. Those in the sign businesses must love this, I think it makes us look like the whole town is for sale.
This will be a busy week as I’m getting ready to take off again. Next Sunday afternoon I leave for Western Ontario and a week in the wilderness.
Posted by sage at 6:35 AM