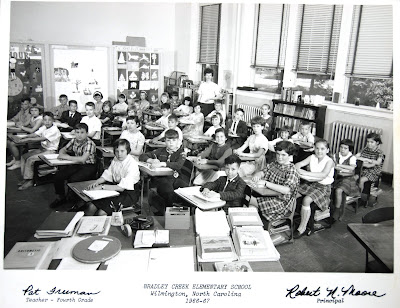 I woke up, having been asleep in the backseat with my head pressed against the window, as we crossed the Brunswick River, a back channel of the Cape Fear. South of the bridge, the river was clogged with hundreds of Liberty Ships left over from the Second World War. Silhouetted against the night sky, the silent ships assumed a ghostly appearance. Mom told us her Daddy had help build some of those ships back during the war. She’d had even started school when her dad left the tobacco farm and moved her family to Wilmington to become a welder with the newly established North Carolina Shipbuilding Company. They’d moved down with her uncle and his family, and because of housing shortages, the two families shared a house. As America was heading to war, thousands of families were leaving the farms and moving into the coastal cities to take positions in the shipyards. Mom and her family spent four years in Wilmington, just a few blocks from the river. We’d later look for the house in a neighborhood that had fallen into decay, but it was no longer there. A year or so later, the site of her childhood house was covered under an embankment for the new Cape Fear River Bridge.

Passing the Brunswick River, the highway runs across a dirt causeway through the wetlands on the backside of Eagle Island. As the city comes into view, the highway turns north and cuts in front of the bow of the battleship North Carolina, permanently moored across the river from Wilmington, its silent 16 inch guns keeping a vigil. After passing the battleship, the road climbs over a drawbridge across the Cape Fear River.

“Daddy, I can smell the ocean.” I said as we crested the bridge.

After crossing the Cape Fear, and some old dry docks, the highway turns back east and we cross the Northeast Cape Fear, which oddly enough is much wider than the main channel. The long bridge supported by wooden pilings, sways with traffic. Until the new Cape Fear River Bridge opened a few years later, cutting out both of the bridges we have crossed this night, my mom would complain about this bridge. The center of its span opened, allowing for ships and barges to go up river, primarily to Ideal Cement and to the lumber yards along the river’s bank.

After crossing the bridge, we turn onto 3rd Street and head south, into town, crossing the yards for the Atlantic Coast Line. The railroad had begun in the early 19th Century as the Wilmington and Weldon and, during the Civil War was known as the lifeline of the Confederacy as it linked the last port open to the South with General Lee’s army in Virginia. By the early 20th Century, the railroad consisted of extensive lines spreading from Virginia to Florida. Although it had been headquartered in Wilmington for decades, the Coastline moved its headquarters to Jacksonville, Florida in 1961. In another year after this night, the line would merge with its rival, the Seaboard Air Lines, to form Seaboard Coastline. Today, it’s part of CSX Transportation.

We continue on down 3rd Street, past the courthouse, and turn east on Market Street, at the statue of George Davis, the Confederacy’s Secretary of State. We take Market Street a ways, turning into a motel. I’d never stayed in a motel before; on our trips, we’d mostly be visiting family or camping. On a few occasions, we stayed in a rental house on the beach. This was a treat, staying in a motel and the three of us in the backseat were excited to see that they had a pool. It was already closed for the evening and we were crushed to learn that we were going to be leaving early the next morning in order to get to our new home before the moving truck arrived.

We were moving from Petersburg, Virginia to Wilmington, North Carolina. I can’t say I was happy about the move. I was leaving behind friends and a neighborhood I loved and for a month or so my nights I’d been filled with dreams of jellyfish and sharks and hurricanes. I’d seen the movie “Flipper” and afterwards my Dad asked if it wouldn’t be nice to live near the water. Although the thought of a pet porpoise was appealing, the hurricane in the movie served as a reminder that bad things come from the sea… In ways, I should have been a Hebrew, celebrating the flowing waters of a river, but maintaining of fear of wide open bodies of water, seeing them as the reservoir of evil.

We were not the first to travel from Petersburg to Wilmington. A little over a century earlier, the two cities fate was closely tied together. General Grant, after failing to take the Confederacy capital with a frontal attack, swung his army southward, to Petersburg, our former home, with the hope to cut the rail lines running to Richmond. For nine months, the two armies fought it out, with some of the battles taking place over land that would become our neighborhood a century later. On Christmas 1864, an attempt was made to capture the Fort Fisher, the citadel guarding the mouth of the Cape Fear and thereby cutting off imported supplies for the Confederate army. The first attacked failed. It could have been a complete rout that would have created serious losses for the North, had it not been for the unwillingness of the southern Commander for the Lower Cape Fear defenses to pursue the attack. The Commander, General Braxton Bragg had the invading army surrounded at their beachhead. Bragg’s appointment to the Lower Cape Fear defenses had been made that fall by the President of the Confederacy, Jefferson Davis, over the objections of both General Lee and the Governor of North Carolina. During and after the war, even though he wore gray, it was often joked that Bragg was the North’s best general. It’s ironic that today, one of the world’s largest military bases, Fort Bragg, located 100 miles west of Wilmington, bears his name.

The North tried again to capture Fort Fisher in January 1865. This time, Bragg had an additional 5,000 troops of Hoke’s brigade that Lee had sent from Petersburg to Wilmington in order to keep the port open. Again, Bragg’s inaction (although Hoke shared some of the blame), allowed a large Union army to land north of Fort Fisher. Then, after the most intense naval bombardment in naval history (a record that I think survived till the Second World War), a two prong attack was made on the fort. The first attack failed, but the second broke through the Confederates lines and Fort Fisher fell on January 15, 1865. A month later, Wilmington itself fell, the last battle being fought in the pine woods a few miles east of our new home. I’d learn these details years later.

We got up early the next morning and ate a bowl of cereal for breakfast before driving to our new home, some ten miles away. We arrived right before the moving van. Immediately the men began hauling in boxes as we kids ran around checking out our rooms. Unlike in Petersburg, where we lived in an established neighborhood, surrounded by houses, here there were only seven houses on a mile and a half long. In the middle of the lot, surrounded by longleaf pines, sat a brick ranch-style house which I would live in till I moved out while in college. My parents still live there, although the house has undergone two remodeling and has drastically increased in size. We worked hard that day and in the afternoon, after the truck had been unloaded, Dad had us pile into the car for our first trip to Wrightsville Beach.

We’d arrived at our new home just a few weeks before school was to start, but those weeks seemed to drag on forever. There were no kids to play with in the neighborhood (something that would change in a few years as hundreds of homes were built in the neighborhood). We played mostly with each other. My brother had a toy cannon that fired a plastic balls. We would pretend the carport was a pirate ship, and with the canon blazing while we picked off sailors on the opposing ship with the wooden rifles Dad had made each of us. We fought through the seas, pretending we were Blackbeard or Steven Bonnet, both of whom had sailed the waters around the Cape Fear and supposedly buried treasure in the shifting sands of the Carolina coast. In the afternoons, when Dad came home from work, we’d head to the beach.

Finally September came and we were rushed out of bed early in the morning and taken to Bradley Creek Elementary School. Mom made sure we knew which school bus was ours (#6, an orange snub-nosed bus). After the opening day, my brother, sister and I would meet the bus down on the loop road for the long and winding ride to school. Miss Freeman was my teacher.

When I was home the other week, my dad had me go through some old photos. I found a picture of my fourth grade class and it got me thinking about our move to Wilmington in the summer of 1966, when I was nine years old. Click on the photo to enlarge it. Can you pick me out? And, in case anyone is geographically smart and wondering why we were moving to Wilmington from Petersburg and coming in from the west on US 74/76 instead of from the north on US 117, the reason is that my brother, sister and I had been staying with our grandparents for a few weeks while my parents got everything packed up in Petersburg and found a home in Wilmington.