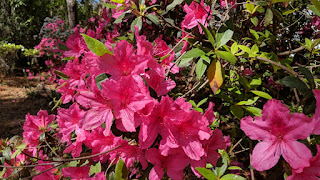 I am not going to do the April A-Z, as I pondered in my last post. I can't seem to find time to do a post a week.  But I did want to check in and let everyone know that I'm still alive and kicking.  Actually, I've been pretty well and have been enjoying our cooler weather (this means highs in the low 60s instead of the 80s) which has allowed us to enjoy azaleas for nearly a month. Last year, it was hot and the flowers seemed to last only a week.  I have been enjoying them even though our bushes have been beat up pretty badly in the last two fall hurricanes.  I have photos of the various types of azaleas in our yard. 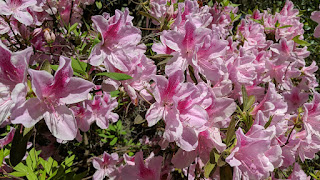 Last week, the Rotary Clubs of Savannah had a reading program. On Wednesday, every first through third grade class in the county had someone assigned to read to the class (nearly 600 classes). I signed up and was right on time for my assignment, reading to a second grade class at Heard Elementary. Part of the deal is that each reader was to give the book (or books) they'd read to the class for their library, which helped get a lot more books into school.  BUT, when I arrived, I learned that the second grade classes were out on a field trip. They must of known I was coming, but I did get a chance to read to a first grade class. I gave them a book on Pirates and another on a girl traveling in Scotland. 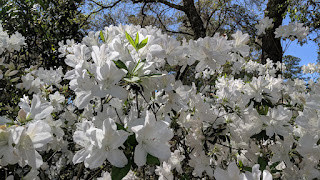 Yesterday, the Wall Street Journal reported that China has come out with the answer to tone-deaf folks desiring to do Karaoke.  There now have private booths where you can sing to yourself.  My first thought was, "What? Don't they have enough showers in China?"  Now I am wondering on what this does to alcohol sales...

This has been a month of reading.  The major work completed was for my book club, Jon Meacham, American Lion: Andrew Jackson in the White House.  I should write more about it in a later post.  I enjoyed listening to the audible issue, read by the author, of Rick Bragg's, My Southern Journey: True Stories from the Heart of the South.  A short book of funny stories was Jim Gillespie, The Cabin: Tall Tales and Murky Truths from Hunting and Fishing the Cape Fear River in North Carolina. Dorothy Stone Harmon, Archibald Rutledge: The Man and his Books was a bit disappointing as I was hoping for more of a biography of a writer that I have been reading more of who died in 1973. I knew most of what she covered about him.  For a man who wrote nearly 60 books of poetry and non-fiction, I think he should be worthy of a biography. Finally, I read  Robert L. Reymond, The Lamb of God: The Bible’s Unfolding Revelation of Sacrifice, which also left me thinking that this is a subject that needs more exploration. 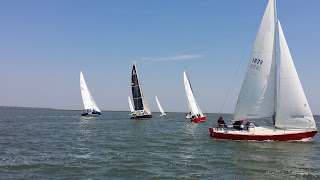 Last Saturday, we raced in the St. Patrick Day's regatta. It was fun, but it felt we were always behind (except for another boat of our class). Most of our racing is done against similar boats, in these races we actually did a lot better than others when the handicap timing of various hulls were factored in. The photo to the left was taken by a friend in another boat that was racing in the non-spinnaker class. We had a steady wind and after the first race, we took down the genoa (an oversize jib sail) and went with a regular jib.  This allowed us to hold a truer coarse.  On this race, we tacked away from most of the fleet (I think one boat followed us).  This allowed us to avoid tidal currents turned out to be the right tactic as we did our best in this race, coming in 3rd.
Posted by sage at 4:35 PM