A Day on the Water (Updated with New Photos!)

I found the photos I lost from my camera. I had taken a few shots with my camera for work, and I had moved them (along with the others) to my work computer.  So now you can see the cute crab! 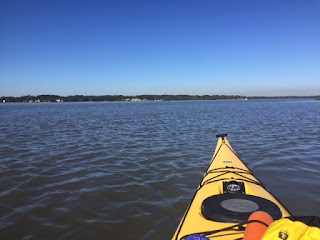 I took last Friday off and for the first time in a month had a full day to kayak. It was a beautiful day for early November, clear skies and temperatures in the low 80s. Leaving  the Landings Marina on the north end of Skidaway Island, I paddled out into the Wilmington River with the falling tide.  Along Cabbage Island, which sits on the north side of the Wilmington River, I stopped to relieve myself of some coffee and explored a little creek that flowed through the marsh.

At the mouth of the river, where it opens into the Wassaw Sound, I turned left, skirting around Cabbage Island toward Little Tybee Island.  Here I saw a magnificent bald eagle circling above, it’s white head and tail feathers very visible..  Sadly, the only camera I had with me was my iPhone, so I was not able to get a decent photo.

I’ve paddled to Little Tybee before, but always from Tybee Island, so this was a first from this direction.  There are some long shoals around the east side of Cabbage Island and I made it just in time as I pushed my boat through 6 inches of water.  Another few minutes and I would have been walking and toting my boat across sandbars.  The shallow water continued on until I was in the waters of the Bull River, which also flow out into the Wassaw Sound.

I ate lunch on Little Tybee and found a place to sling a hammock, but the bugs were pretty bad as the island was blocking most of the wind on the southwest side.  Instead of being annoyed by bugs, I set out to paddle across the face of the sound, where it empties into the ocean.  It was slack tide, which meant the shoals from the Bull River extended out into the ocean.  The only encounter with any waves this trip (and these were small) was when I crossed those shoals.  Had I tried to stay further inside the sound, I would have run aground on sandbars.

Coming up on Wassaw Island as the tide was turning, I noticed the remains of Battery Morgan is now well out into the water at low tide.  This “fort” was built during the Spanish American War to prevent ships from getting to Savannah through the Wilmington River, but was abandoned after only a year or so.  Today, all that’s left is a large chunk of concrete that is slowly eroding away from the island.


It was much more pleasant on Wassaw Island, as the wind coming from offshore kept the gnats and flies away.  There are tracks of ghost crabs running on the sand and I spot one and chase it into the nook of an old tree where I capture some incredible photos (however, when I started posting to this blog, I can't find those photos).  I then nap before riding the rising tide back into the Wilmington River and to harbor.  I’d been gone a little over six hours and had paddled somewhere around 13 or 14 miles.