Early Music that Influenced Me (and a sailing photo) 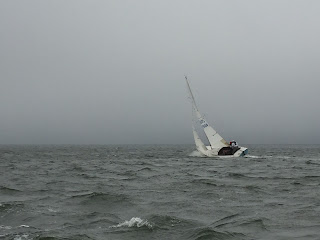 I finished this post while watching the Steelers and Patriot’s game.  I’m not happy the outcome.  We’ve had bad thunderstorms since Saturday afternoon and for much of the time we've been under a tornado watch.  However, before the weather turned bad, I was able to enjoy a bit of time yesterday on the water.  The winds were strong (so strong that we decided not to race).  As the wind blew from offshore, it brought in fog. It was exciting to be on the water as the photo illustrates.

I decided to follow a post by Charles at "Razor Zen.  This "meme" calls for a list of  the top ten albums (from ten bands) that were important to me during my teenage years.   It took me a while to whittle down my list to ten.  I stuck to music that was important during my high school years.  There are others that albums that became important in my waning teen years, but was after I was in high school.  This list of bands would include Pink Floyd (Wish You Were Here” came out just after I graduated high school), Steely Dan, Van Morrison, and the Cars.  There were others that were important in high school and would continue to be important, that just didn’t quite make the cut include Jefferson Airplane, Bob Dylan, Heart, Jim Croce, Harry Chapin, 3 Dog Night, and the Carpenters (who didn’t love Karen Carpenter’s voice and what American boy didn’t lust over her looks).  Here are my top ten bands with their album and the year it was released:

Although I would continue to enjoy all this, in college I began listening to Pink Floyd, Electric Light Orchestra, Steely Dan, The Cars, Van Morrison, Bob Dylan and the early albums by Jefferson Airplane.
Posted by sage at 9:25 PM