On Tuesday, I had my six week post-op appointment and the doctor granted me thirty degrees of movement in my left knee.  It has been two months since my accident and it feels great to be able to tie my shoe and to get behind the steering wheel of a car (even though I still have to twist a bit to make it).  On Wednesday, I started physical therapy and have light exercises at home.  The horror of PT has yet to hit as they are being very careful not to do anything that would damage the tendon while it is still healing.  But I’m coming along and that feels good. 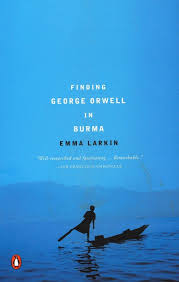 I have been interested in Myanmar or Burma for some time.  In 2011, I was just 10 kilometers or so for the border in Thailand.  It was a time people were discouraged from traveling to the country as a way to economically discourage the military leaders and their harsh reign.  The country government is a weird blend of totalitarianism, socialism and Buddhism.  Burma was a former British colony and George Orwell began his career there as a colonial police officer.  It was there he began to despise colonialism and his first book, the novel Burmese Days was set within colonial Burma.  In the early 1940s, the Japanese moved into Burma.  At first, they were welcomed by the Burmese.  Some of those fighting the colonial regime had even been trained by the Japanese and returned with the Japanese army, but the native Burmese realized that the Japanese treatment of their country was worse than the British and soon, the Burmese soldiers began to fight against the Japanese.  After the war, Britain granted Burma its independence.  The nation, which has eight ethnic groups and 130 sub-groups, has been hard to govern, leading to civil war and an oppressive military government that stifles dissent.  Yet, the population is fairly literate, which leads student groups and others trying to bring change, which is brutally crushed by the government.  The all-present “MI” or military intelligence watches everyone (including Larkin as she traveled around the country).

Larkin visited the country having immersed herself in Orwell’s writings.  Interesting, Orwell’s novel Burmese Days is the only one approved for publication and sale in Burma.  The anti-colonial stance of the book fits the ruling regime’s politics.  Others like Animal Farm and 1984 are suppressed.  Of course, Orwell was writing these books in light of the totalitarian dictators such as Stalin.  Larkin, however, found these books as fitting descriptions of modern day Burma, with the ever-present thought police and the danger to those who are bold enough (or foolish enough) to question the actions of the generals who run the government.   Throughout the book, Larkin keeps referring to Aung San Suu Kyi, the daughter of a former leader of the country who fled, then returned and has lived for years under house arrest.  She appears as a strand of hope for the country.

Larkin follows Orwell’s path around the country, while visiting with many of the country’s writers and publishers.  One author laughs and says that you can write anything, you just can’t have it published.  (134) Almost all the authors she met have had a book banned by government censurers.   As for the nation’s readers, Larkin discovers they’ve developed a skill of reading between the lines.  If a particular politician or general suddenly disappears from print, people quickly conclude that they have fallen out of favor with those in power.  This “reading between the lines,” along with a desperation for hope, has led to some unique interpretations of stories.  The movie “Lion King” was described by one as the story of Burma.  Simba, the young lion who flees his home, is Aung San Suu Kyi.  Simba’s father, like Kyi’s, was murdered.  The evil lion that turns a beautiful kingdom into a wasteland, Scar, is Ne Win (the leader of the generals who overthrew Kyi’s father’s government in 1962).   (132)  She also tells of a dream from an ancient king of Northern India that was interpreted by the Buddha to refer to a future time when the rulers were wicked and greedy.  Paintings of this dream begin to pop up on pagodas around the country following the 1962 military overthrow as if the Ne Win regime was its fulfillment.

In addition to dealing with the literary and the political issues of the nation, Larkin’s book is also a travelogue as she describes the landscape of this mystical kingdom.  Mandalay, which has such an exotic sounding name, is hot and can be dusty and dry or wet.  Rangoon, is hot and humid and the delta towns that Orwell lived, was even worse.   It wasn’t the favorite location for a British citizen to work, but for Orwell, whose family had ties there, it was his first choice.  Contrasting to Mandalay and Rangoon, the foothill towns seem pleasant.  The British, including Orwell, would often take holidays there.  In addition the ethnic groups, Larkin encounters many who are of mixed races (Burmese and English).  Many of the mixed race people fled and those that didn’t now feel trapped.
This book left me grieving for this rich country that has been destroyed and whose people are also hopeless.   The book epilogue tells of Aung San Suu Kyi’s disappearance (thankfully, she survived).  Things are supposedly better in Burma today, but I wonder.

A decade or so ago, I read Pascal Khoo Thwe’s memoir, From the Land of the Green Ghost: A Burmese Odyssey.  It tells the story of a young Burmese Catholic student who fled Burma and went on to earn a PhD from Oxford.  He was from a tribe that lived in the mountains, where opposition to the government was greatest.  Larkin did not get that far into the mountains and I’m sure travel there would still be dangerous.  I would recommend both books, however I think some familiarity with Orwell’s writings would help one appreciate Larkin’s take on Burma.
Posted by sage at 11:17 AM