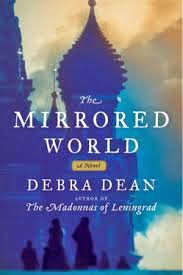 Debra Dean, author of TheMadonnas of Leningrad, returns to Russia for her second novel.  In The Mirrored World, Debra Dean draws us back to 18th century St. Petersburg (the city’s name for two hundred years before it become Leningrad and the name the city reclaimed after the collapse of the Soviet Union).  This was the era when empresses ruled Russia and could order people around for their own amusement, when the nobility enjoyed lavish dances, and the poor struggled to live.

Through the eyes of Dasha, young girl of lower nobility, we are provided a portrait of Xenia, one of Russia’s saints.  In addition to learning about Xenia, we also are treated to snippets of St. Petersburg’s history such as the fire which destroyed much of the city in 1737.  Did it really happen or did Dasha just dream it?  The fire left much of the city homeless including Dasha’s older cousin Xenia, whose home was destroyed.  Xenia and her family moved in with Dasha’s family (whose father was away at war).  We experience the comedic and cruel rule of an empress who punishes one of her aides who had displeased her by forcing him to marry and old hag and then making the two spend their honeymoon in a castle constructed of ice (including their bed).  This actually happened as the aide had married a “papist” or Roman Catholic, for which he could have been executed.  Instead, he was sentenced to public humiliation that could have led to his death.  We also learn of the Empress delighting at throwing a party in which everyone must cross-dress.  She delights at the crude dancing as the women (dressed as men) take the lead on the ballroom floor.

In the background of the royal activities in Russia’s capital, Xenia marries and later gives birth to a baby.  The child dies and she is warned that she should never give her whole heart to anything mortal (84).  Next, her husband dies.  This occurs at the comedic dance which he attended with Dasha as Xenia was still too upset to be seen in public.  Upon his death, Xenia begins to give away her possessions to the poor and eventually becomes a “holy fool” and only answers to her deceased husband’s name.  Dasha marries (a eunuch) whom she loves but who also dies.  Afterwards, she miraculously receives a “son.”  Dasha tries to keep an eye on Xenia, but the sightings become fewer and fewer yet her kindness is known far and wide.  Miracles are attributed to her work.

I received an advance copy of this book to review and began to read it in 2013, but only got about half way through and I lost the book.  I wasn’t really engaged in the story the first reading, but when I moved this summer, I found the book and picked it up and read through it rather quickly last month.  The story of Xenia is well told, in a mysterious way as perhaps is the best way to tell the story of one who is held up within the Orthodox Church as a saint.  I enjoyed the “mirrored vision” of 18th Century Russia and would recommend this book to others who are interested in history or in just a good story.  What makes one a saint?  What would happen if we really took to heart Jesus’ command to give all away in an attempt to follow him?  Could our heart-breaks be a source of hope for others?
Posted by sage at 5:38 PM