I had come to North Carolina to check on my mother (she is now in a care facility with Advanced Alzheimer’s) and to do some fall fishing with my dad up at Cape Lookout.   The weather promised to be nice, a little windy (which was nice as it keep the mosquitoes at bay).  But after driving up to Harker’s Island and loading down the boat with gear for three days, we got out into the sound heading to Lookout, we realized that overnight the weather had changed.  The wind had shifted and after two waves broke over the bow, we headed back to the safety of the marina.  We could have probably made it to the island, but with a strong northwest wind we would have never been able to fish around the point or jetty.  So, we headed back and instead of fishing off Lookout, we decided to spend the next day kayaking on Rice and Town Creek in Brunswick County.

A few years ago I wrote about another trip in which we explored the lower part of Town Creek, boating up the creek from the Cape Fear River.   On that trip, we turned around at the Brunswick Country Park which has a kayak landing.  On this trip, we began at the Wildlife Resources landing on Rice Creek and paddle to the kayak landing at the park, a trip of 12 or so miles (plus a few more due to two wrong turns).   I had paddled these waters in my youth, but the last trip on this creek was over 30 years ago. 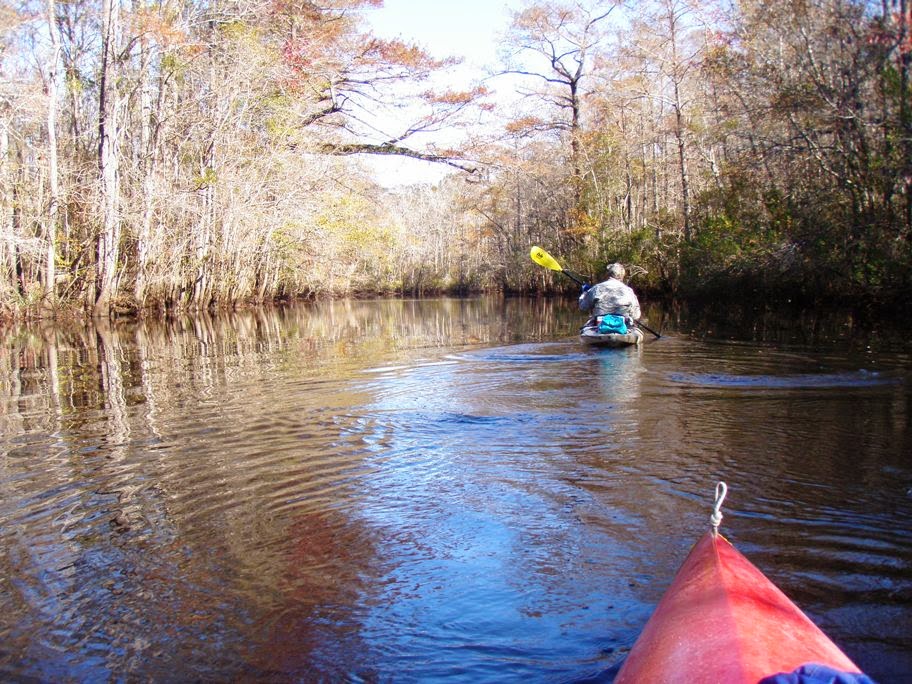 It’s a cool morning.  The temperature, which had dropped to nearly freezing overnight, has risen into the low 40s when we slide our boats into the creek at 10 AM.  We started out heading down stream toward Town Creek. The wind is brisk, out of the northeast, which is roughly the direction we’ll be traveling.  There is no current (the tide is rising, but this far up it isn’t much of a problem except that there is no elevation change to create current).  We pass a secluded home on a high bank with “no trespassing” signs staked out at the water’s edge.  I notice what I at first assumed was a weird kind of fungus was growing on some logs in the river, then realized they had been painted pink (maybe it was red and had faded).  I also noticed an interesting tree that had dropped out over the water, and a branch had become a new tree, shooting up and clothed with colorful leaves.  The original top, which hung just above the water, is dead.   We arrive at the confluence with Town Creek quicker than I thought.  Dad’s in the lead and I follow him.  Although there is a branch off to the right, we continue straight into the main channel and take the second right.  We are making good time, or so I think.  Then I notice some more of that weird fungus and that tree hanging over the water and the house…  We’d taken the oxbow to be the main channel. 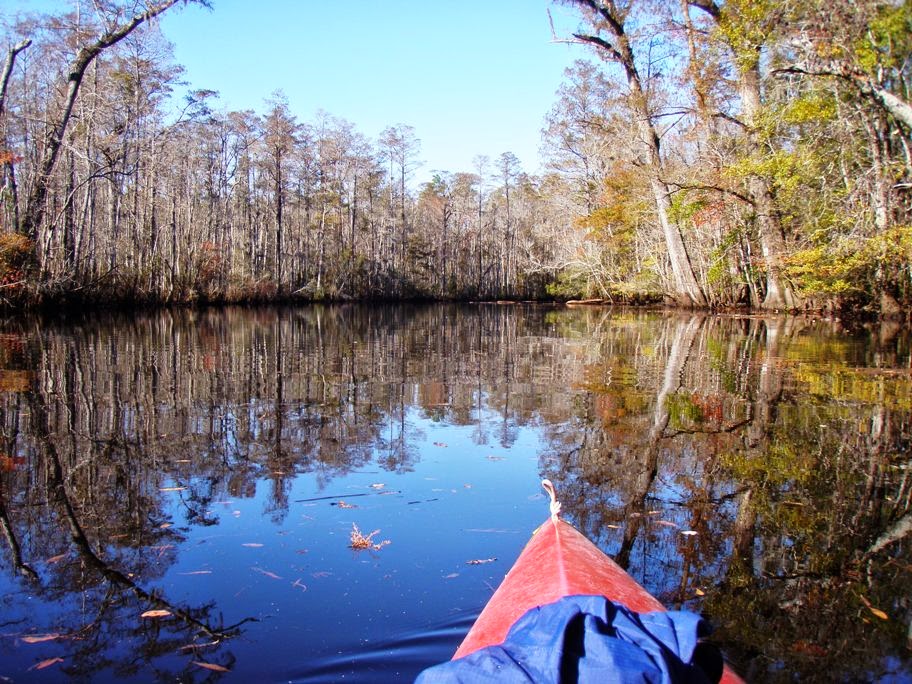 Continuing downstream, after having paddled in a circle, we arrive at the confluence 30 minutes later.  Here, the creek is larger and there are some trailers parked along the north bank.  Huge flat-topped bald cypress along with sweet gums line the river banks and further inland, where there is higher ground, pines grow.  We hang a right.  I am in the lead and at Morgan Branch (without any current to give me direction) I take a wrong turn and head upstream.  As the stream narrows, I hear the sounds of US 17 and realize that we have again made a wrong turn.  Dad disagrees, but I pull out my new iphone and turn to the map app and sure enough, we are well off course.  We begin to retrace our route.   I notice I am a little lightheaded and assume my sugar may be down, so I pull a small apple and a half piece of pita bread and eat them both as I paddle. 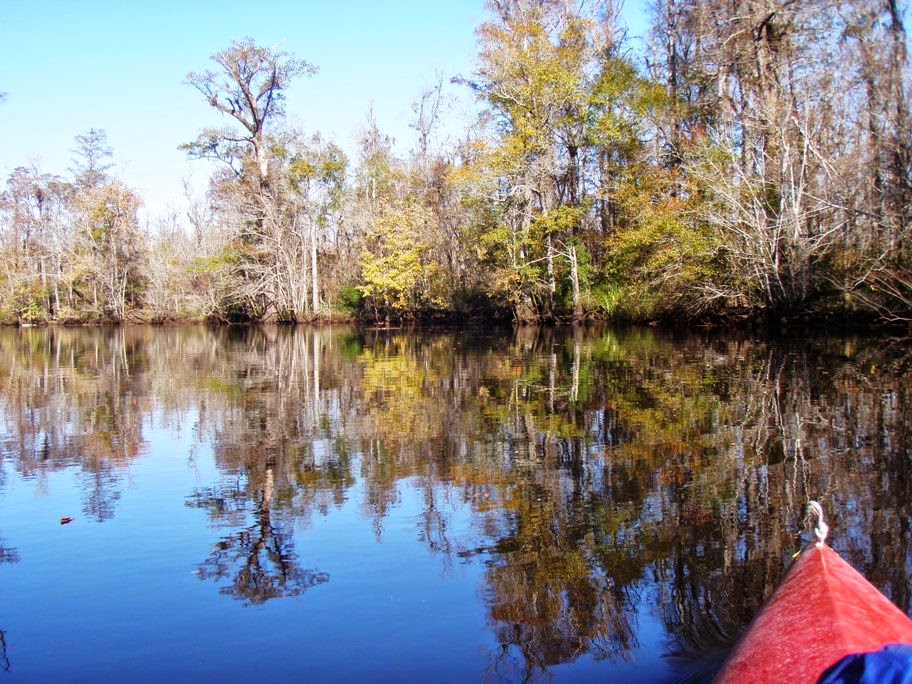 At 1 PM, we decide to stop for lunch along the south bank, in an area that is state game land.  I check my blood sugar level and I’m at 90, which is low considering my snack an hour earlier.  Obviously, I am burning more calories than I had assumed.  As we eat lunch (canned beans and weanies, crackers, humus and pita bread and a bottle of beer for each of us).  As we eat, several deer including a small buck runs by, not more than 20 yards away. 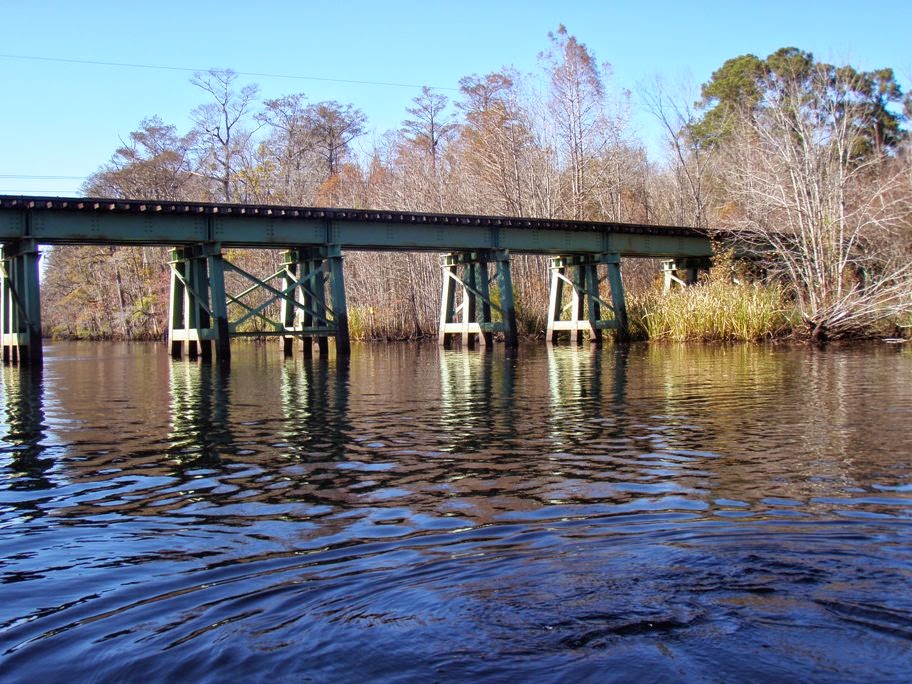 Shortly after lunch we cross under a railroad trestle for the government railroad that runs from Wilmington down to Sunny Point (a military shipping terminal).   After the trestle, the creek twists and turns, as it winds itself from a high bank on the north side to one on the south side.  The high banks can be spotted from a distance by the pines, while the area in between them cypress swamps.  A few turns after the trestle, it becomes apparent that the cypress are stressed and the further we travel, we begin to see more and more of them dying so that at the time we are at the landing at the Brunswick County Park, they are all dead.

The river meanders to an extreme.  Sometimes we are paddling into the wind and other times the wind is to our backs.  The good news is that the tide is falling and the current helps, especially when paddling into the wind.  When we arrive at our destination, at 4 PM, we have covered only about 5 air miles, but have probably paddled at least fifteen miles.  It has been a good day.  In addition to the deer we saw at lunch, we saw a few others later in the afternoon.  It is already too cold for alligators, which do inhabit this creek closer to the river, but we did see a number of turtles.  There were several pairs of kingfishers and numerous waterfowl, a few blue herons and egrets.