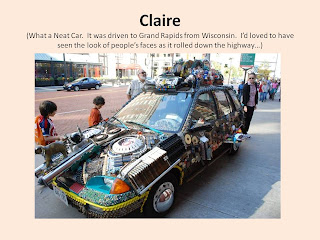 
We have had a two week string of beautiful weather here in West Michigan.  Mostly sunny skies and no precipitation has allowed me to do a river trip, get out in the woods hiking, bicycling to work and in general have enjoyed the fall in ways that is not normally possible in a place that has more cloudy days than Seattle…  That’s came to an end last night as you may have seen in the American League Championship Game, which was rain delayed.  Those drops from the sky were tears as I can’t stand the Rangers almost as much as I can’t stand the Yankees.  I supposed having the Tigers beat the Yankees is just a taste of heaven, having them beat the Yankees and Rangers back-to-back would be heaven… 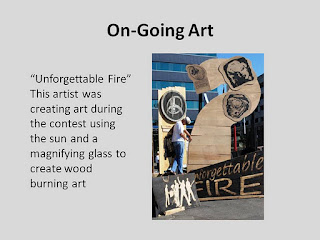 Last Friday I spent the day in Grand Rapids, taking in the sights at Art Prize 2011.  This is a unique art exhibit (it’s huge with over a 1000 pieces on display).  Art Prize is unique in that it doesn’t use “professional art judges.”  Instead, viewers determine the winners.  Viewers vote on their top ten, then there is a run-off as they vote on their top choice. 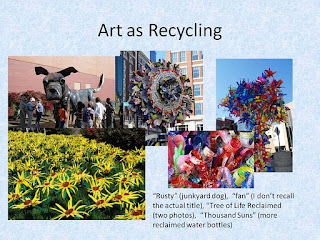 In walking around the exhibits along both sides of the Grand River, I noticed a few themes.  Religious art is very popular, along with art from junk (recycled art).   Those pieces receiving top votes were often religious, had ties to West Michigan (like a statue of President Ford) and were large.   The dress for the day seemed to include either a Detroit Tiger’s t-shirt or hat… 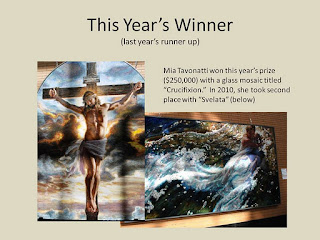 Although I thought this year's winning piece was beautiful, I think the artist's piece from last year was better.  I couldn't help but wonder if her subject matter helped win her votes in Michigan's Bible Belt.  She's started this mosaic for a church in California but the construction was put on hold and so she entered it into Artprize. Both of her pieces are beautiful; however, they were both in a room with too much south-facing light for the displace of art (the intense sunlight creates the shadows in my photos). 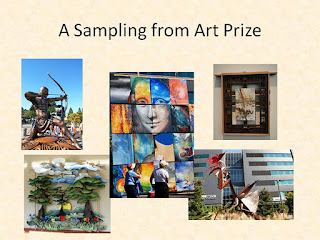 For my posts on last year's Art Prize, click here and here. 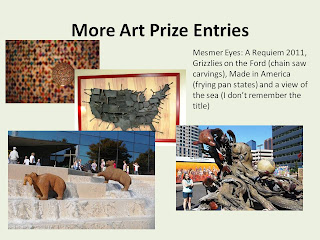 Finally, walking across the Grand River, I couldn't help but be envious of the guy in the river with his fly rod, fishing for spawning salmon.  As I have been gone all summer and was too busy to fish in the spring, I don't even have a Michigan fishing license!  At the Gerald R. Ford Presidential Museum, a host site for many art exhibits, there were carved bears in the fountain (title, "Grizzlies on the Ford).  I couldn't help to wonder if there wasn't a political meaning behind these bears since, from what I recall, the stock market was rather "bearish" during Ford's tenure as President. 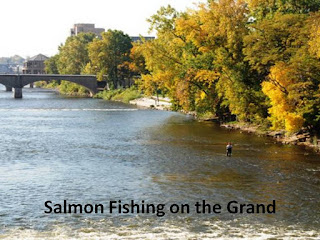