Washington on the brink of a shut-down (A Travel Post) 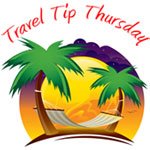 Travel Tips Thursday is a writing prompt hosted at Pseudo's Spot.  Recently, she’s been on hiatus, but she recently resumed hosting the prompt which encourages us to write and give tips about travel to interesting places around the world.  As many of my post are travel related, I often have used this writing prompt.  Coming back from the North Carolina coast the end of the week, we headed a new way, through Washington DC.  It’s a little longer than going through West Virginia, but it did give my daughter her first opportunity to see our nation’s capital (and during the cherry blossom season, no less!). 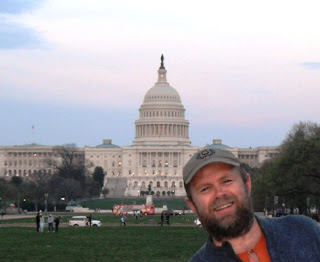 When we came out of the Smithsonian’s Air and Space Museum, which is open till 7:30 PM on Thursday nights, the sun had set and the sky was beautiful.  We walked the length of the mall to the Washington Monument, watching the sky change colors and jets from Reagan National Airport take-off behind the monument.  It was a beautiful evening. There was a group of young adults playing softball and another playing soccer.  People were flying (or attempting to fly) kites.  As we walked, I kept looking back at the Capitol, as the lights came on lighting up the marble.  I wondered if the government shut-down at midnight Friday, would they’d turn out the lights…  Climbing the hill to the Washington Monument, we could see the White House to our right.  As I was getting hungry, I wondered what Michelle had fixed for dinner and if they would be open to a few more mouths at the table.   At the top of the monument, a street preacher was shouting through a microphone one cliché after another about the Christian faith.  No one was repenting, but several stopped to watch as park service police officers approached.  He stopped talking about the need to be born again and started proclaiming his rights to free speech and religion.  Turns out such freedoms don’t extend to amplifiers and he was informed that if he wanted to continue, he’d have to do so without the benefit of modern electronics.  As I watched the encounter out of one eye, I gazed down over the Lincoln and Jefferson Memorials and the various war memorials, all lighted up.  We walked back down to where we were able to pick up the Circulator Bus (they run about 10 minutes apart and cover much of Capitol area.  Asking the bus driver where a good place to eat near the hotel, he recommended Phillips.  It was a great recommendation as we ate next to the Potomac.  The place is known for their buffets that include crab legs ($16.95 for lunch, $24.95 for dinner), but it was 9 PM and I didn’t want to pig out so I had a flounder sandwich which came with enough fries and carbs to seriously deplete my insulin supply and only cost $10.95.

On Friday, before getting on the road, we went to the Capitol.  After the tour, my daughter decided she wanted to see congress in action so we went over to our representative’s office and got passes.  We first visited the senate, where she saw half-dozen senators hard at work.  After each senator did a bit of grandstanding, they’d leave the chambers, the only on staying the whole time (from my vantage point) being John Kerry.  Kay Bailey Hutchison got up and talked about her bill that would continue to pay those in the military in case of a government shut-down.  She went on and on about their sacrifices and how many senators had signed on…  (There were 50 some senators who'd signed on when we came into the chambers, and by the time she finished, she kept getting notes of new senators signing on giving her over 60 supporters by the end of her rant.)  It all sounded good to me until she came to the closing remarks (she was like a bad preacher who, just when you think is done, goes on—kind of like this blog post).  In closing, before yielding the floor to Chuck Schumer of New York, she noted that her bill would make sure our military and our private contractors got paid…  I wanted to jump out of my seat (but that would have gotten me kicked out) as this was the first time (at least since we’d come into the room) she’d mentioned private contractors.   Of course, since campaign contributions come from those private contractors (and they probably have goons who’d break senators legs if they didn’t paid), what should I have expected?  Next Schumer complained about the “house riders” added to the bill, and then a guy from South Dakota talked about our national credit card being maxed out.  Clichés in the senate seemed to be as common as they were with that street preacher.

On our way back to Michigan, my daughter kept texting friends of hers (who were also traveling back from Spring Break), as they discussed the potential government shut-down.  Finally, at the last hour, they passed a bill to keep the government (and the presses that print money) running.    Oddly enough, I learned the news through the BBC News Hour on public radio.

Travel tips:  If in Washington, use the Circulator buses to get around ($1 a trip).  Also, Phillips is a nice place to eat as is Union Station (it’s walking distance from the capitol and we ate a quick lunch there before getting on the road).   Finally, Priceline.Com got us a 100 buck room on the Potomac, just 4 blocks from the mall.  Our car stayed safe in their garage while we walked or took the bus to see the sights.  If you want to see the Senate or House in session, getting the passes before doing the tour would have saved us the time of another security check.  Of course, to really see all Washington has to offer, one needs a couple of weeks! 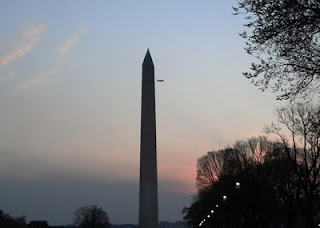