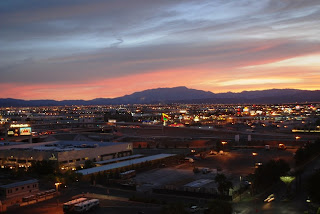 We’re back from our trip west. Coming home of the red-eye was much less hectic than the two days it took us to get out West. The plane was only four minutes late this morning, well within the margin of error for a transcontinental flight. As I try to avoid saying much about family here, I’ll just acknowledge that I now have another daughter and I hope she and my son have a good life together.

They got married in Las Vegas, in the “world famous La Bella Wedding Chapel.” I didn’t know it was world famous having first heard of it when the invitation arrived. It turns out this was the place Mike Tyson married his most recent victim wife, and just in case that those of us who’d gathered would have missed that we were in the “world famous La Bella Wedding Chapel,” the preacher inserted the line three different times into his ceremony. The wedding chapel in Cana, where Jesus changed water into wine, was only mentioned once.

I love Nevada (and you’ll get to hear about more places in that state over the next few weeks), but I can’t stand Las Vegas. It’s so over-the-top and fake. Steve Wynn, one of Vegas’ top developers once said something along the lines that Vegas is what God would have done at creation if he’d had the cash. But I can’t believe that the God who created the Grand Canyon and the smallest desert flower that blooms in March and who sends the most wonderful sunrises and sunsets across the desert floor is that tacky. In Vegas, you’re crowded by people as your eyes feast on constant water features or are blinded by neon light, all the while the noise level is so great that you can’t think straight. It’s everything that the desert isn’t. But enough of my rant, I was excited to go see what this city was up to since the economic downturn. I wasn’t overly impressed.

They’re back! At every corner of every intersection along the strip are six or eight guys who assault you with cards advertising women who supposedly will make your every dream come true. Ten years ago or so, the city was doing a pretty good job of keeping these “Wetback Pimps” off the street. Now, I assume the police are stretched so thin that they don’t have time. It may not be politically correct for me to say this, but I think a few INS agents could clean out the city in a manner of hours.

Of course, Las Vegas is a multi-cultural/multi-national city. People from all over the world flock there and one of the benefits of this multi-nationalism is the food offerings. That said, I wish I had time to explore a particular sushi bar in a strip mall south of the city. The place was called “Sushi Mon” and I couldn’t help but wonder if the Jamaicans aren’t trying to weasel their way into the sushi business… By the way, if any of you don’t know the origins of sushi, you really should read Roy Blount’s short story “I Don’t Eat Dirt Personally,” in his collection of southern humor. Another thing I found strange along the strip was the advertisement of a “Mini-Kiss” concert. Silly me, I thought a mini-kiss was a peck…

And finally, Las Vegas is the place that you can buy all kind of tee shirts that you’d never wear in front of your mother. Along the strip there was a place selling shirts with silhouettes of pole dancers and the slogan, “I support single mothers.” Who would wear such a shirt? But as I reflected on this, I realized that it is probably more truth in such a statement than I’d want to admit. Of course, it isn’t because the wearer of the shirt has compassion, but the desperate situation of many single mothers. (And before you ask, no, I didn’t buy a shirt.) 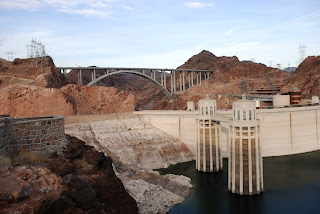 In addition to the wedding and meeting an old friend in Las Vegas, another highlight was driving down to Boulder Dam early on Sunday morning. The city was as quiet as it gets and the sun just rising over the distant mountains as I drove down Boulder Highway. I wanted to see the new bridge over Black Canyon, which diverts traffic from the dam itself. Ever since 911, there has been concern about traffic over the bridge (they no longer allow trucks to travel over it as a way to protect the dam). In addition, the road winding down into the canyon is slow and the new bridge will be a more direct connection between Southern Nevada and Northern Arizona. 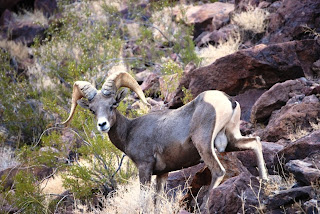 The bridge was something to see, but what was really neat was seeing (and photographing) four desert bighorns sheep on the Arizona side of the canyon. They’ll be more photos and stories to come… 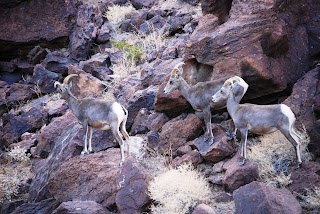