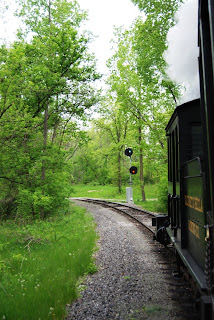 What a way to end a career as an elementary school chaperon! My daughter had her last field trip as an elementary school student yesterday, a trip to Greenfield Village and the Henry Ford Museum on the other side of the state. Like so many other times, I went along as a chaperon. It was scheduled to be a long trip. We gathered at 6 AM and were suppose to be home between 7 and 8 PM. We got home at 11, after the bus blew a tire on the freeway! Getting to bed shortly before midnight, I was rousted out at 2, when the storm cells moved through with high winds, constant lightning and window-rattling thunder, creating one freaked out dog… He's got a hang-over this morning! The photos are from yesterday's trip. 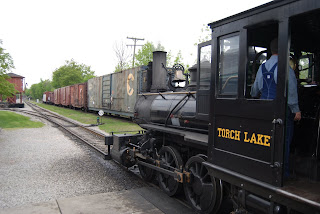 I’d never been to Greenfield Village and the Henry Ford Museum. It’s an impressing place. We got to ride in Model T’s and on an old stream train and watch glass blowers (my favorite) and make candles and all kinds of other stuff. The museum boast Lincoln’s chair at the Ford Theater and the actual bus (restored) that Rosa Parks rode back in the mid-50s. All the kids got to sit in her seat. There was much more to do, but it would take a couple days to do everything.

I like the fish on the storm drains at Greenfield Village. I’ll end with that shot as I got to get some work accomplished. I also got to find time to write more of my “Country Boy” memories as well as catch up on some book reviews. I really enjoyed Michael Perry’s Population: 485. He’s a Yankee version of Rick Bragg, whose family memoirs I’ve recently reviewed. I also want to capture my nostalgic views of Edward Berkowitz, Something Happened: A Political and Cultural Overview of the Seventies. Although work is still crazy, I’m planning on heading back across the state next week to take in a Tiger’s game.
Posted by sage at 10:01 AM