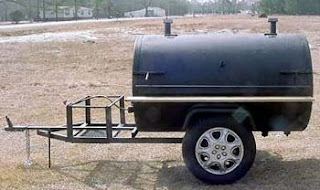 My long time readers will remember stories of me cooking for crowds. But I felt I needed to write this story so I can establish my credentials for my next book review. I'm reviewing Holy Smoke: The Big Book of North Carolina Barbecue! I borrowed the photo from the left. It's an example of the style of cooker I'm writing about.
-
I no longer remember how it all came together, but late in the summer of 1981, I helped cook my first pigs. That winter, I’d accepted Ron’s invitation to come to work with the Boy Scouts and the weekend after Labor Day, we’d planned a big event at our council camp. All adult leaders in the council were invited for what became our first “Program Planning Day.” I was in charge of the food. Somehow, it all came together. A hog farmer in my district had told me he’d provide a few pigs a year for the scouting program. I approached Ronnie, an assistant scoutmaster in my district, and asked him to help. I’d heard he was an experienced hand. Ronnie agreed, but he only had one cooker. He suggested we go talk to another guy and see if also help us cook. I no longer remember his name, although I still have the recipe for his sauce. He agreed to help us as long as I provided a bottle of Jack Daniels. With that, we were set. Because it was a large crowd, we had two large hogs that dressed out around 150 pounds. I brought a hundred and twenty pounds of charcoal and also got the ingredients for slaw and tea. That first year, we brought hushpuppies and potato salad from a local restaurant on White Lake.

Ron and couple other of my co-workers met me at the council camp late the day before the feast. Shortly afterwards, Ronnie and his friend arrived, both towing a cooker made out of old 270 gallon oil drums. The drums had been cut lengthwise and laid on their sides, and attached to the back of trailers. The top half of the drum opened, allowing access to the racks holding the meat. Pipes for the smoke had been attached to the drums as well as doors in the side in which more coals could be added and the draft controlled. One of the cookers even had a thermometer on the outside. We began by preparing the charcoal in a large metal bucket on the side. It was important to have the coals ready before they were placed under the meat, to keep from the meat from picking up the flavor of the lighter fluid. The pigs were placed on the racks, skin side up. We cooked them this way for a few hours, then turned them over and began to slather the hogs with the vinegar-based sauce. Every few hours, more coals were prepared and placed under the meat and more sauce mopped on the meat. A constant eye was kept on the temperature, with the goal to make sure it didn’t get too much above 220 degrees. Smoke billowed out of the cookers and we watched to make to make sure we had no fires which would burn the meat. While Ronnie and friend watched the cookers, the rest of us chopped cabbage and made cole slaw and gallons of tea and set the tables in the dining hall, all while taking nips from the bottle of Jack. At midnight, everything was ready ‘cept the pigs, so several of us went swimming in the lake. Afterwards, we crashed.

I was up at dawn, before the first rays of the sun struck the tops of the cypress along the shore of the lake, and walked behind the dining hall to check on the pigs. They were nearly done. Ronnie and his friend, who’d taken turns checking on the pigs during the night, were both awake. Coffee was perking and on the grill were several feet of linked sausage. First, I was going to sample a piece of the pig. It was delicious. After everyone was up, someone scrambled some eggs and we had breakfast. Then we began hauling parts of the pig (it was so tender it broke apart) into the kitchen where we began the process of chopping the meat. After chopping, we mixed the meat in large pans and added fresh sauce on top, covered them in foil and slide them into a warming over to wait for the hoards we were expecting at noon. Everyone loved it.

Over the next three years, Ronnie and I would cook a number of pigs for various scout functions. We prepared them for leader dinners, annual banquet and golfing tournament fundraisers. Whenever we had a lot of folks to feed, we’d chop the meat and serve it, but when there were not so many, we’d serve it pig pickin’ style, and folks could help themselves, pulling meat from their favorite parts of the hogs. Most of the pigs we cooked with charcoal, but a couple of times we cheated and used a gas grill that we borrowed from Ronnie’s work. Once, I helped another guy cook a pig using oak. You can taste the difference. I’ve not cooked a whole hog since 1984, when I left Eastern North Carolina, but I have on many occasions prepared barbecue, using shoulders and baby back ribs.