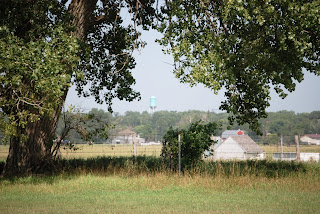 I’m a little late in getting back to vacation posts—as this was almost a month ago—there’s been too much other stuff going on. Last time, we were looking for Laura Ingalls in the Big Woods of Wisconsin. This post is about our trek out to South Dakota. The picture of DeSmet’s water tower is framed by one of the cottonwoods planted by Charles Ingalls when he homesteaded this property in the 1880s. 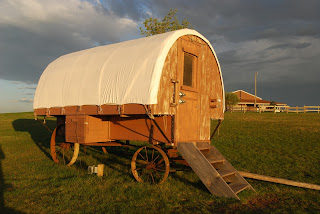 DeSmet South Dakota was the highlight of the trip. We spent two nights there, staying on Pa’s quarter section homestead and sleeping in a covered wagon. Well, it wasn’t exactly the same type of wagon that Laura and family traveled in all over the Midwest. It was better. This was a sheepherder’s wagon that had been outfitted with extra bunks. It had a screen door, electricity and included a fan! I don’t know Ma and Pa and the girls did it without a fan, for it came in handy when the wind died. The Ingalls’ homestead is a neat place. During the day they have all kinds of programs designed for kids, teaching them the skills Laura and Ma used to on the Prairie. My daughter had a wonderful time, playing with the animals, attending a one room school, talking to all the workers and showing off her knowledge about Laura. She fed an orphan calf milk, played with barn cats for hours, drove a team of horses, shucked corn among other stuff. Dressed in a pinafore and bonnet, she looked the part running out across the grass. Only her flip-flops gave her away. 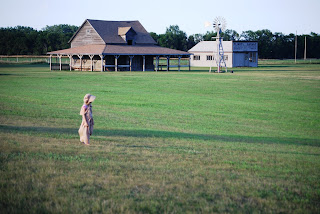 Driving from Pepin, we took the fast way to DeSmet, dropping down to I-90 and taking it across Minnesota. I thought it might be fun to stop at the Spam Museum in Austin, MN. After explaining that Spam isn’t only unwanted emails but also a famous yet mysterious form of canned meat, I was quickly outvoted. My daughter is on her way toward becoming a vegetarian anyway and probably didn’t need any encouragement which I’m sure the museum would have provided. If ever I again pass through Austin by myself, I’ll be sure to tour the Spam museum. At least it’ll make a great blogging post and since it’s free, what’s there to lose. I drove on into South Dakota and missed my turn (I was going to take the interstate up to Brookings and then to DeSmet) so I ended up coming to DeSmet from the south, passing by the place where Laura first taught in a one room school. We found the Ingalls Homestead, checked out our wagon adobe, and then heading into town for some evening grub. After dinner, we went back to the homestead and a peaceful evening watching the light change on the prairie. That night, storms rolled through the area, but they were either north or south of us. I went outside and spent half and hour enjoying the lightning show. The air was cool and dry, the sky was big, It felt like I was back in the West. 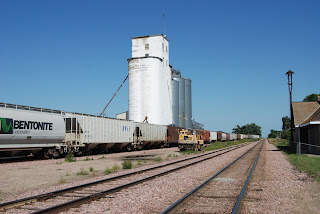 The next morning, we were treated with a beautiful sunrise. We drove into town for breakfast (it’s only a mile or so away), then came back to do all the stuff at the homestead. After we spent the morning there, we went back into town and spent the afternoon touring the town, going through the Surveyor’s House (where the Ingalls’ lived when they first got to town and was the location for the novel, The Long Winter. We also toured the house that Ma and Pa later built after Pa gave up homesteading, the Depot Museum which is in the old station for the Chicago Northwestern Railroad (now the Dakota, Minnesota and Eastern). The museum also had information on Harvey Dunn. I’d seen his paintings before and liked his style. “The Prairie is My Garden” is his most famous painting, but he also painted many military scenes for the American Legion magazine as well as even some works depicting the human body. We also went to the graves of Ma and Pa and out to the site where Laura and Almanzo first lived. That night, we came back to the wagon for a cookout (I’d brought my smallest Dutch oven and fixed a cobbler to top off the feast).

Our final day in DeSmet was a Sunday. We decided to go to church where Laura attended, so we headed back into town and found the old Congregational Church which is now a Christian and Missionary Alliance Church. The service was okay even though the pastor (who’d been retired for sometime and was filling in) could have been a contemporary of Laura’s. The Ingalls and Wilder’s attended the Congregational Church and Pa helped raise money to buy the church’s bell. Sometime in the past (it looks to be in the 50s or 60s) the Congregationalists built a new church (one of those hideous A-framed churches that was popular back then). The bell that came out of the old church is now on display beside the Congregationalists Church A frame. After church was over, we left DeSmet for Walnut Grove, Minnesota. I hated to leave the prairies, for I knew it meant that I had to go back East, but it was time. I’ll write about Walnut Grove in a future post. 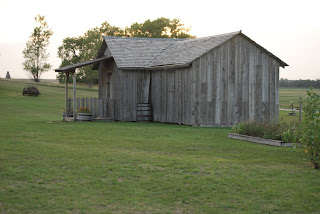 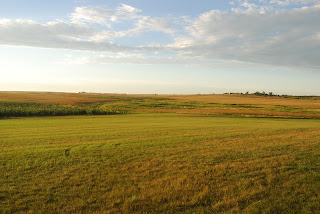 These last photos are of the replica of the Ingalls' "little house" on their homestead and a picture of the land and sky, looking toward the slough where Pa knew he could always cut grass for the animals. For a poem I wrote after watching the sunrise on the prairie, click here.
Posted by sage at 11:48 PM