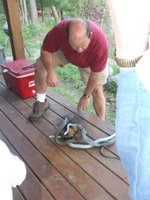 The weather was nice. A bunch of us gathered at Dave’s shack on Cedar Creek late yesterday afternoon. After dinner, some grilled chicken with leftovers from the night before, we sat on the porch sampling bottles of Crooked Tree IPA (India Pale Ale). I kept watching the creek thinking I needed to retrieve my fly rod from the truck. It’s a small creek, but supposedly there are some Browns in it. About this time someone headed to the outhouse. "You all need to see this," he yells. We head over there and on the ground, tangled up in some netting, were four large Blue Racers (snakes). Examining the netting, Dave recognizes it as stuff he’s used to save plants from deer. The netting must have been pulled off the plants and blown around on the ground, which formed it into a large ball. These snakes had got tangled into this ball of webbing, creating a Medusa like scene. Since snakes don’t have great capability to back up, they kept trying to get through the netting, which only entangled them more. As you can imagine, by the time we found them, they were plenty mad at the world. 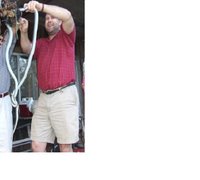 It was obvious that we had to do something. I rejected the call for a mercy killing, thinking I could get them out. Dave found an old pair of scissors in the shack. We came up with a couple of knives. Being careful to avoid their heads, I started cutting the netting. It wasn’t easy as each of these snakes were 3-4 feet or so long and caught into a piece of netting rolled into a ball about two feet in diameter. Sticking out of this ball were four tails and three heads (one head was caught inside the tangled webbing). The first snake was easy to get out. I pinned his head and was able to work the knife between his skin and the nylon webbing, cutting each band. Soon, he was free and took off as soon as I dropped him on the ground. The other three snakes were even more tangled and two of their heads were next to each other. Dave had a stick and was trying to keep one of the snakes away from me as I worked on the other (with only two hands, I could only hold one snake at a time). At some point, the snake got away from Dave’s stick and as I was concentrating on freeing the other snake, I was nailed twice on my hand. Although they’re not poisonous, it didn’t feel particularly good. As the old saying goes, "No good deed goes unpunished." 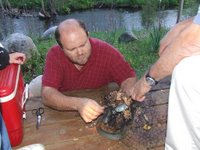 We finally got the snakes free. The last one died and may have been dead when we started, as it was the one whose head was deeply enmeshed in the netting. It was dark by the time we finished and we quickly packed up and went home.

For previous stories about Sage and Snakes, click here.

You're getting a better view of my hair challenged head than the snakes, but hopefully these pictures give you some idea of what happened last night. I cut the faces of other folks out since I'm not sure they want to be plastered across the WWW. It was too bad that the camera came out after we'd already freed two of the snakes.
Posted by sage at 8:56 AM