My Green Manifesto (a book review) 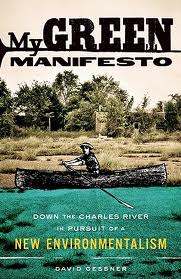 David Gessner, My Green Manifesto: Down the Charles River in Pursuit of a New Environmentalism (Minneapolis: Milkweed Edition, 2011), 225 pages.

I am a sucker for any book on paddling rivers.  A few weeks ago when I was on the campus bookstore at the University of North Carolina at Wilmington, this book jumped off the shelves and into my hands.  David Gessner teaches in the Creative Writing at the university.  In this book, he explores what it means to be an environmentalist as he and Dan Driscoll, a longtime friend and former Ultimate Frisbee teammate, paddle the Charles River through eastern Massachusetts.  Dan works for the state and his project has been cleaning up the Charles River so people can enjoy it again.   His efforts have earned him the nickname “River Dan.”   The Charles River isn’t very long.  Its source is only 26 miles from Boston (but there is a lot of winding before it gets to the city).  Like most rivers, it has been dammed and used as a way to get rid of waste.  But in the past few decades, the river has become cleaner and much of the property along side it has become available and is now a part of a green belt that allows people and animals to flourish even in a heavily populated area.

Gessner is troubled with the way the message of the environmental movement is often filled with doom and gloom and the need for immediate action.  He suggests that for most people such an attitude won’t lead to action but resignation.  Instead of pushing for the impossible, Gessner suggests a different strategy.  Before someone burns out on the impossibility of saving the earth, have them connect with nature and experience its beauty and awe.  You fall in love with a “place,” then you will want to fight for it.  That’s why projects like Dan’s work on the Charles is so important for there are many people who are able to make a connection with nature along a river that dissects an urban landscape.

Gessner starts out alone on the first day.  Dan had work to do so after stopping for coffee and donuts, he drops his friend off in a kayak at the headwaters of the river.  The solo paddle gives Gessner a chance to share with his reader a conversation in his head about the environmental crisis.  It is in these personal thoughts as well as the later discussions between David and Dan that the story unfolds.  Along the way, other characters are brought into the conversation.  Gessner is reading Break Through, by Ten Nordhaus and Michael Shellenberger.  These two environmentalists are critiquing the movement, yet Gessner finds their solutions lacking and in a way their book serves as an antithesis to his own thoughts.  Other environmentalists are brought into the conversation include  John Hay, who Gessner knew in his later years on Cape Cod when he was studying osprey, and Ken Sleigh, who inspired Edward Abbey’s character “Seldom Seen Smith” in the Monkey Wrench Gang and who Gressner had met in the La Sal Mountains above Moab, Utah.   In addition to conversations with those he knew, Gressner also carries on a conversation with those who had blazed the way such as John Muir, Rachel Carson and Henry David Thoreau.   He also draws insight from Bill McKibben, Wallace Stegner and Wendell Berry.  Toward the end of the book, he tries to avoid mentioning Thoreau, feeling that he is overused, but is unable to stop the conversation as Thoreau is so important to how he experiences the natural world.

Of course, as in any good river trip, Gessner can pull away from what’s going on in his head to appreciate the flight of a great blue heron or the sighting of another bird or animal.  The trip ends, ironically, in the Boston basin on the fourth of July, with fireworks.

I enjoyed this book, not just because of the interesting debate Gessner carried on in his head, but because he now lives where I was raised.  Occasionally, his mind will wander back to his new home.  I have paddled the same creeks behind Masonboro Island and have camped there on the deserted beaches.  And I also have a daughter about the same age and am interested in helping her experience the joy that comes from being outdoors.  Although Gessner isn’t writing from a religious perspective, I couldn’t help but think of the Christian concept of stewardship, especially as it is interpreted from a Calvinistic theology.  The world belongs to God.  God gives us the responsibility to care for it.  However, we’re not to care for it as a way to earn God’s approval, but out of a joy and thanksgiving of having experienced what God has done and is doing for us.   In a similar vein, Gessner envisions a new wave of environmentalist arising out of the experience of joy and love of creation.   Such joy gives us excitement as we “sacrifice toward creating something much larger than ourselves.”  There is hope in such a message.