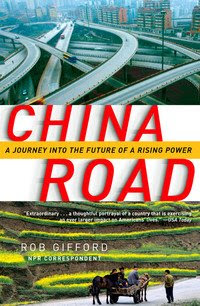 I haven’t been into writing much lately. Instead, this weekend, I did things like make a big pot of split pea soup and sat by the fire reading as the snow reappeared (but since we lost most of our snow, there isn't enough to ski).
-
-
Rob Grifford, China Road: A Journey into the Future of a Rising Power (Blackstone Audio, 2007 release), 10 hours and 37 minutes.

What a better way to end a chapter in your life than to hitchhike across country. Rob Gifford time in China, as a reporter for NPR, is coming to an end. After packing up his family and sending them back to their home in Great Britain, he sets out to cross China on Route 312, the “Mother Road.” His journey leads him from Shanghai and the highly industrial east, through the Gobi Desert and various ethnic regions and on the Kazakhstan. Traveling with a backpack (and a copy of Steinbeck’s The Grapes of Wrath), he utilizes all forms of transportation—hired cars, buses, and trucks—to make the trek. As he travels, Gifford draws upon his understanding of the complexity of this vast country, providing the reader lessons in history, religion, language and economics. He continually comes back to the question of what China’s future holds. Acknowledging the positive changes since the death of Mao, he sees great possibilities as well as dangers in China’s future.

Gifford often travels off the beaten path. He visits farmers who’d sold blood for plasma and are now infected with AIDS. On the road in a bus, he talks with a physician and nurses about China’s one child policy and the horror stories of forced late-term abortions including the rumors of children who survive the abortion procedure being drown. In one town, he meets two men who are dressed in ties (a novelty on the desert frontier) and discovers they’re distributors for the Chinese branch of Amway. Astonished, he attends their evening meeting where they tout their luck at selling mouthwash to a nation of garlic eaters. They also proudly proclaim that all the Chinese Amway products are all made in China. One Sunday, he spots a church and decides to visit. The congregation’s pastor doesn’t show up and they convince Gifford to speak. Later, in the Gobi, Gifford spends the night in the dunes, sleeping on a mat and watching the colors of the day fade and the beauty of a desert night and the next day’s sunrise.

My favorite part of Gifford’s tale is the time he spent in the ethnic regions of China. Although the vast majority of the country’s population is Chinese, they mostly live in the eastern portion of the country. As one travels further west, in the less populated areas, the people are not ethnically Chinese. He discusses how modern China, like the dynasties of the past, has tried to woo the ethnic areas. Ethnic Chinese who tour and vacation in these areas see stereotypical views of colorful dressed natives serving exotic foods and performing traditional dances. Gifford find that they’re always dancing interesting, reminding him of Native American tourists’ villages in America.

Gifford explains both sides of China’s vast empire. Certainly China herself doesn’t see it as an empire, but many of the ethnic people do. China tells their nation’s history in order to reflect the party’s stance that the ethnic areas have belonged to China for 1000s of years even though that’s not accurate. His exploration of the ethnic areas provides him an opportunity to discuss the Chinese language. To those of us in the West, the language seems complex, but isn’t really, especially once one gains a basic understanding (there are 200 radicals that make up the characters that one must learn). He notes that in the past, those who lived west of the Great Wall (in the ethnic areas) were labeled with the same Chinese character for a dog. But in the 16th Century, after the Chinese reoccupied these territories the last time, they changed the character in an attempt to relate better to the people there. Gifford also notes that although the Chinese expanded west, that they their haven’t become a conquering power elsewhere and in the 15th Century, the emperor had what was probably the greatest fleet at the time burned, for he wasn’t planning on being a naval power. Unfortunately, for China, the next challenge came from the sea as the Western world made their way to the region.

Gifford interest in China came from reading the stories of missionaries to the nation. He first visited the nation as a student and has come to love the people and the complexity of the country. But he can’t help but wonder if China isn’t condemned to repeat itself. Chinese history is filled with examples of the people revolting and those who obtained power eventually becoming corrupt while ignoring the needs of the populace, which sets the seeds for another revolt. In many ways, the Communist Party (which today has little to do with Marxist economics) is just the latest in a long string of corrupt national leaders.

I listened to the audio version of this book.
Posted by sage at 9:51 PM