Honduran Politics (going to the dogs?) 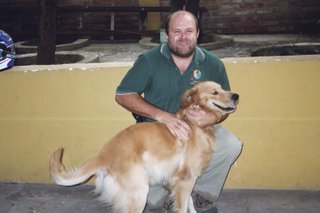 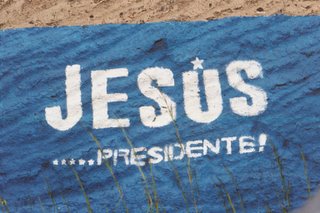 Driving the main highway between San Pedro Sula and Tegucigalpa, one wonders if Honduras isn’t an overly religious country populated with Christian fundamentalist. After all, Jesus for President signs are seen, painted on rocks, throughout the countryside. When asked about the signs, I’m told that this Jesus isn’t the Son of God or a Puerto Rico baseball player, but a politician for the National Party who ran for President of Honduras several elections ago. He lost. Yet, his signs on rocks still stands along with newer signs for Pepe and Mel and a couple other minor candidates that are running for the office this year. The Honduran election occurs later this November. Pepe and Mel’s signs, I’m sure, will continue to remain visible until they finally weather away. I’m going to have to find out what kind of paint Jesus’ sign painter used and use it on the trim of my house.

If you’re thinking that Pepe and Mel and Jesus are all first names, you’re right. Actually, with Pepe and Mel, they’re nicknames. Their real names are Porfigia Lebo (I think I got that right) and Manuel Zetaya. Can you imagine what the 2004 US elections would have sounded like if the battle had been between Georgie Boy and Johnny, instead of Bush and Kerry?

Honduras allows a president to serve only one term. In Central America, being elected for a second term allows for one to assume dictatorial powers, so the constitution prohibits one from seeking a second term. I was told the constitution always prohibits the President of Congress from running for President, but that doesn’t stop Pepe, the National (or Conservative) candidate. No one could explain this to me, but then I had a hard time explaining our elections, so we came out even.
Most of the Hondurans I know are mostly apathetic about national politics. Those who vote plan to vote for Mel, the Liberal candidate, but mostly they agree that all the national politicians are crooked. As one suggested, the Nationals (Conservatives) are just a bit more crooked than the Liberals. I nodded emphatically, knowing how they feel. The Liberal Party colors are red; the National Party colors are blue. You can tell which party candidates for mayor and congress are by the colors of their posters.

I got a feeling the Nationals will win this year. Pepe is running on a plan to change the
constitution to allow the death penalty (maybe he’ll do this when he changes the constitution to allow himself be president) as a way to fight the gang violence in the cities. Of course, the Liberals too are concern about violence, but they raise legitimate concerns about the use of capital punishment. After all, this is Central America and trials are not always fair, especially when one is a member of the wrong party.

I had a couple of brushes with political fame in Honduras. A friend, the principal of the school in San Jeronimo, is running on the National Party ticket for Mayor. My other brush with Honduran political fame occurred in Tegoose (short way of saying Tegucigalpa). I was staying with a friend who lives down the road from Mel (Mel lives in a very middle class neighborhood for Honduran and certainly for American President standards). One morning, Mel’s dog (a big puppy) was out roaming the street. I had to get a picture of me with the dog, for it may become a collector’s item. If Mel wins, the dog will be the "First Dog" of Honduras. And if this happens, I may take the picture off the blog and try to sell it on Ebay.

By the way, dogs in Honduran cities (who are generally kept for protection) have a much better life than dogs in the countryside where they’re all scavengers. If Hindu’s are right, one has to have very bad karma to come back as a dog in the villages. And I can’t see Mel’s dog being much of a guard dog, however he did have guards with big guns in front of this house and the neighborhood had guards at its entrance.
Posted by sage at 8:44 AM